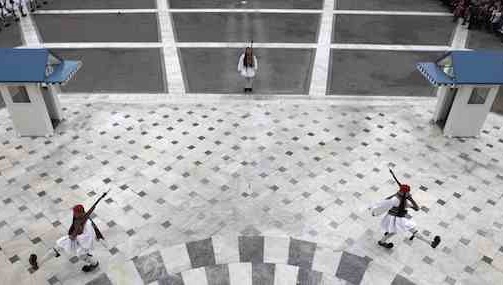 The news agency Reuters made an impressive tribute to Evzones. Their photographs during private moments (when they dress up or take a break) shed some light on the backstage of the presidential guard, whose history began in 1867.
Evzones are famous throughout the world thanks to their clothing. The fustanella was designed as part of the outfit of the then Palatial and current Presidential guard.
The history of Evzones began in 1867, with the establishment of four battalions, each of which included four units. Their central task was to guard the borders. In 1868 a fifth unit was added to each battalion. The initial composition of these battalions consisted of volunteers, soldiers or lieutenants, who usually came from mountainous areas.
Their glorious action during the Balkan Wars was crucial and Evzones were from that moment considered as heroes.
Their title has changed several times since 1914 (the Flag Guard, Guard of the Tomb of the Unknown Soldier, Royal Guard, Presidential Guard). Their current name is “Presidential Guard,” which was attributed in 1974, after the collapse of dictatorship.
There are many symbolic factors that attributed to the outfit of Evzones. For example, the pleats of each fustanella are rumored to be 400, equal to the years of the Turkish occupation. Nevertheless, fustanellas hardly ever have 400 pleats.
The units that guard the Tomb of the unknown soldier wear the official outfit only on Sundays and during national holidays. On the rest of the days they wear the usual clothing of Evzones.