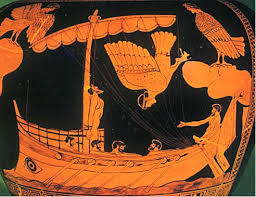 Two neighboring cities in central Italy claim to be the mythological place cited by Homer where Odysseus fell in love with Circe. One is the  island of Ponza and the other, the Mount Circeo.

Italian hotel keepers and restaurateurs are exploiting the myth of his love affair with Circe, aiming to boost tourism and increase their revenues.

In both cities there are streets, shops, hotels and restaurants that have been named after the two mythological lovers. Visitors will see a popular bar named Maga Circe, the cinema Ulysses (Odysseus), the hilltop Circe’s Peak boasting the ruins of an ancient temple, the Circe Promenade and a luxury hotel named Maga Circe.

According to the locals in Ponza, Odysseus was sailing north from Sicily, so the first land he reached, was Ponza Island and not mainland Circeo. The residents of Circeo claim that Homer talked of an island and that in ancient times, Circeo was surrounded by the sea on one side and by  lakes on the other.

Ever since The Odyssey first appeared, historians have questioned the existence of Homer and they have moved his birthplace at least 10 times. According to other sources, Circe’s island was somewhere in the Black Sea, in the current Georgia. Many cities and locations claim themselves to be the real places of Odysseus’s wanderings, for political, economical and ethnic reasons.

However, the truth is hard to define and geography isn’t important. Odysseus’s journey is symbolic. Homer describes a journey to the boundaries of the known world, where the hero defeats the unknown.