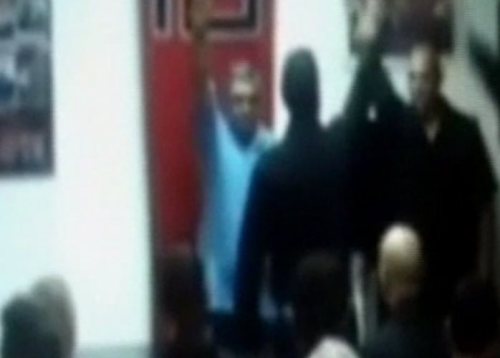 New shocking evidence for the action and the methods of the Greek Neo-Nazi political party, Golden Dawn, is in the hands of the investigating magistrates Ioanna Klappa and Maria Dimitropoulou.
The bulk of the new evidence is said to have been gleaned from an examination of the personal computers and cell phones of several Golden Dawn MPs and officials who have been questioned as part of a broader criminal investigation into the party. These computers and cell phones were seized by anti-terrorism officers on Thursday, when they raided the houses of several MPs and Golden Dawn’s offices.
The most valuable evidence until now, has come into the possession of the two investigating magistrates. These new findings concern the nature of the political action of Golden Dawn and consist of  documents and photographs which have been erased from the personal computers of the Golden Dawn’s MPs, but Greek police managed to recover.
In particular, one of the videos shows the chief of the Golden Dawn Party, Nikos Michaloliakos making the Nazi-Salute alongside with Georgios Germenis, Golden Dawn’s MP. These Nazi-style salutes are taking place during the initiation of new members who are taking vows of loyalty to the party. In this video one of the members says that “all those who are moaning but yet wait passively on their couch are worms and we must take them down too. This is what they deserve.”
In addition, in the case file there is a transcribed speech of Nikos Michaloliakos that takes place in a tavern where he addresses Golden Dawn members: “We are the bad fascists, the nationalists. The truth is that they are right, we are all these things. Our purpose is not to make those that are in the Greek Parliament “better” or to correct the corrupted political forces. Our purpose is to finish them off.”
Another new member of Golden Dawn appears in the video saying: “I am a part of Golden Dawn because I am a Greek rebel. We must all kill the Hebrew that exists inside us. On the first day of judgment, far from church’s theories for forgiveness and sins, we will hang all those who still have not decided which side they are on.”