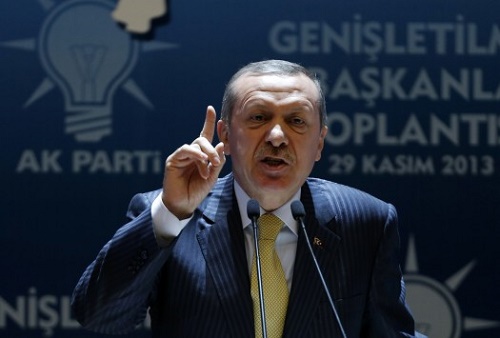 The statement made by Turkish Prime Minister, Tayyip Erdogan, that Turkey’s borders reach Thessaloniki, provoked an angry reaction from the Greek government.
Responding to a reporter’s question about the Turkish Prime Minister’s statements in Kessani, the Ministry of Foreign Affairs representative, Konstantinos Koutras, said:
“The historical and geographical references to an area with such a strong historical significance as the Balkans should always be conducted with care. Today, the only criteria is to abide by the international law and the rules of good neighborly relations based on respect for sovereignty and territorial integrity of all the nations in the region.
For Greece this is a fundamental, self-evident and inviolable position.”
The Turkish Prime Minister Tayyip Erdogan was in the city of Kessani near the Turkish border a few days before the scheduled visit of the Turkish Foreign Affairs Minister, Ahmet Davutoğlu, in Athens, Greece. In a nationalistic frenzy Mr. Erdogan said that Thrace is very important to Turkey.
During the municipal elections tour he said that “Thrace is also Thessaloniki, Komotini and Xanthi. It’s Kardzhali and Vardar. If we go a little further it’s Skopje and Pristina, it’s Sarajevo.”
He continued: “Thrace is the living witness of our common history with Europe. It represents our past in the region. Today, Thrace is in the center of all our Balkan relations along with Adrianople, Tekirdağ, Kırklareli and of course Instanbul.”