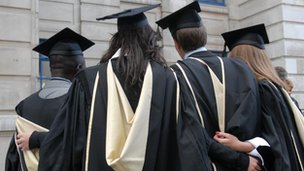 It appears that the crisis has changed the attitude of Greek students towards their studies. In the past years they weren’t hurrying to complete their studies but nowadays they desperately get back to universities.
The financial magazine “Economist,” referred to the way the financial crisis put an end to the eternal students phenomenon in Greece, changing the mentality of young people.
“What a difference it can make” states the magazine, referring to Athens University and Athens Polytechnic that remain closed for 13 weeks due to strikes.
As reported, “the same Greek students  who used to stage months-long sit-ins to press for a bigger say in running university affairs are now desperate to get back to studying, while they don’t spend up to ten years getting their first degree, especially those who belong to the middle-class.”
According to the magazine, many families, can’t afford to keep their children in university for a decade due to high taxes.
“With youth unemployment at a record of 58%, increasing numbers of young Greeks want to get their first degree out of the way and go abroad to acquire professional qualifications.” says the article.
The article also refers to the serious complaints of university employees about the mobility scheme. “The strikers complain that administrators were ordered to move without first being evaluated. The job cuts, they claim, reflect the same system of political patronage formerly used to make civil-service appointments.”