Demonstrations in Memory of Alexandros Grigoropoulos 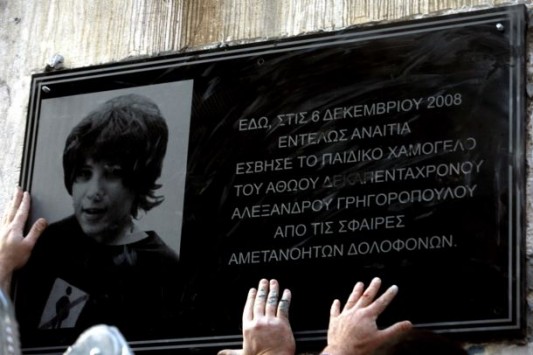 Demonstrations took place today in many Greek cities to honor the memory of Alexandros Grigoropoulos. It has been five years since Alexandros Grigoropoulos was shot dead by a policeman in the Exarcheia district of central Athens. The murder of the young student by police resulted in large protests and demonstrations, which escalated to widespread rioting, with numerous rioters damaging property and engaging riot police with Molotov cocktails, stones and other objects. Demonstrations and rioting soon spread to several other cities, including Thessaloniki, the country’s second-largest city.
Today’s demonstrations were organized in several Greek cities by many leftist organizations and the education community, in order to commemorate Alexandros Grigoropoulos.
During the demonstration march in Athens earlier today, minor clashes occurred between the protesters and the MAT riot police unit. The protesters attacked the police units, with punches and kicks. As a result one of the police officers was slightly injured.
As tension was expected, a solid police force was deployed across the Center of the Greek capital.

Feta, Greece's most famous cheese, has become viral world-wide thanks to a food blogger who recently created an easy and tasty recipe of feta with pasta.
Greek Food