Thousands of Santas Pound the Streets of Chania 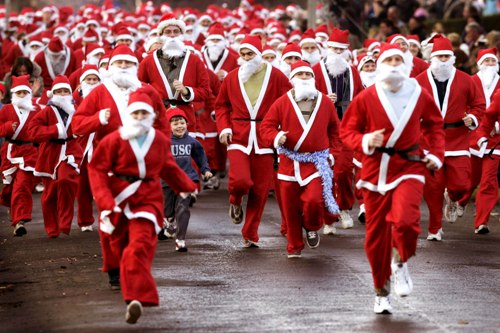 The first year of the annual “Santa Run” there were 400 Santa’s. Last year ​​1,500 took part, but this year they hope to reach 3,000. This is the number of Santa Clauses who are estimated to set out on December 27, to cover a distance of 3.5 km through the historic center and shopping precinct of Chania. Their sole purpose —  raising money for children with health problems.
The “Santa Run” is a festive and  charitable event, organized along the lines of similar events in other cities of the world which take place every year during December. The race involves participants wearing Santa Claus costumes, with shops providing refreshments for the runners, but in the form of beer rather than water.
The Santa Run originated in Chania by a small group of volunteers, and is now one of the most original and exciting events in the Cretan calendar.