Tsipras at American-Hellenic Chamber of Commerce 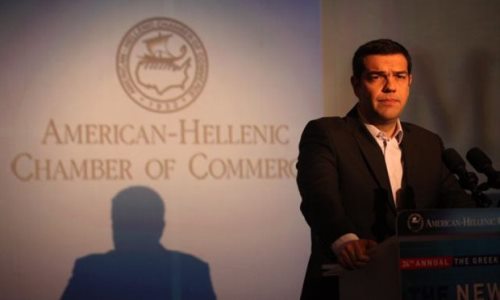 The American-Hellenic Chamber of Commerce organized the 24th annual conference “The Greek Economy: State Reform — The Cornerstone for Investment and Development.” The opposition leader Alexis Tsipras was among the central speakers.
After SYRIZA took second place at last year’s double elections, Mr. Tsipras has made conscious efforts to approach the business world by arranging a series of trips to the USA and meeting with various institutional players. Today’s speech was essentially a follow-up to his recent appearance at a conference in Austin, Texas in November, where he categorically stated that Greece will not exit the Eurozone.
Mr. Tsipras’ efforts in approaching the business world are noticeable, as the business cycles associated with the American-Hellenic Chamber express their approval, considering SYRIZA a reliable party.
In his speech, he stressed that his party was in favor of supporting Greek enterprises and encouraged investments in innovation, while respecting labor, tax and environmental legislation.