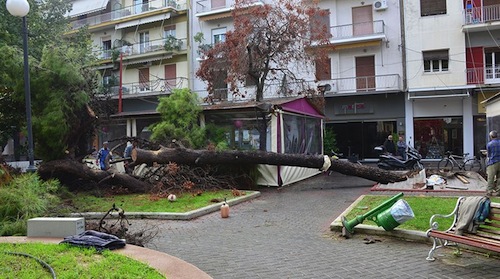 Many areas in Athens, Greece are without electricity today, due to the abrupt weather change and the strong winds that started Monday evening.
In Piraeus, Rafina, and Lavrio in Attica, as well as in the Rio-Antirio crossing in Western Greece, ferry boats have been forbidden from leaving the port for several hours.
The routes to Aegina from Piraeus, to Andros, Tinos and Myconos from Rafina, and to Tzia from Lavrio, have been cancelled and port authorities believe there is a possibility that further sea routes will be cancelled due to the recent forecasts that the weather will worsen over the course of the day.
In Attica, the Fire Department received more than 230 telephone calls in the early hours of Tuesday to report fallen trees and branches, requesting their removal, while a tree fell on two parked cars near the train station in Menidi, Attica.
The Hellenic National Meteorological Service warned that conditions will worsen during the day and will probably hit eastern and southern Greece the hardest. Strong winds, as high as 10 on the Beaufort scale are expected in the northern and central Aegean Sea.
The sudden weather change that occurred, prompted snowfall in the areas of Florina, Kastoria and Grevena, in North Greece, while the temperature in Thessaloniki was 7 degrees Celsius. There is also a forecast for strong storms in Crete and Peloponnese.
(source: ANSA)