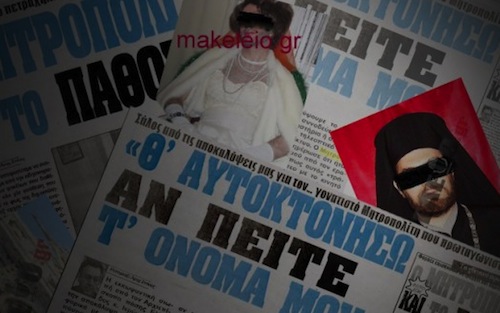 There are serious concerns within the church after a sudden outburst of scandalous reports started circulating in the press and on the internet. Scandals involving priests.
The first incident to go public, included photographs of a priest who appears to be posing in a wedding dress and a fur. It was also revealed that an Archimandrite was searching for sexual partners on the internet, and showed himself completely naked in front of the camera.
A few days ago a further scandal broke, this time involving a military chaplain and his mistress. However, the most serious incident was the publication of a picture showing a metropolitan bishop of the Greek Church in the midst of a lewd act with another man.
According to the newspaper “Acropolis”, which was responsible for publishing the picture, the bishop himself had apparently contacted the reporter, warning him that he would kill himself if his name was made public. Furthermore, the bishop confirmed the authenticity of the image and admitted that it was part of an attempted extortion.
These first cases have already caused significant damage, and sources reveal that a direct response by the justice of the Church is to be expected.
The Church has not commented on the issue until today. They said that the focus is now on the meeting of the Holy Synod next week, where officials of the Orthodox church will be discussing how best to handle these cases.