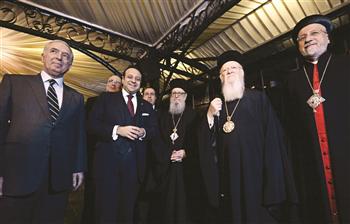 Turkish EU Minister Egemen Bağış hosted religious leaders and prominent figures from minority communities at a dinner, the Hurriyet Daily News reports.
Speaking at the event, Bağış praised Turkey’s development in dealing with the problems of minorities and said issues would be “solved together.”

Bağış also took the opportunity to praise the government’s “democratization package,” which was announced by Prime Minister Recep Tayyip Erdoğan on Sept. 30.
During the meeting, civil members of minority communities directly and confidently brought their issues onto the agenda.

Bağış said Turkey needed the support of the religious leaders of minorities in the country.
The EU minister also emphasized the recent law on foundations, which allows for the return of minority foundations to their communities, and also mentioned that Trabzon’s Sumela Monastery and Van’s Surp Khach Armenian Church had been opened to worship.

Rain — Not Snow — Could Become the Norm in the Arctic