Toll Increase of up to 60% in Greece 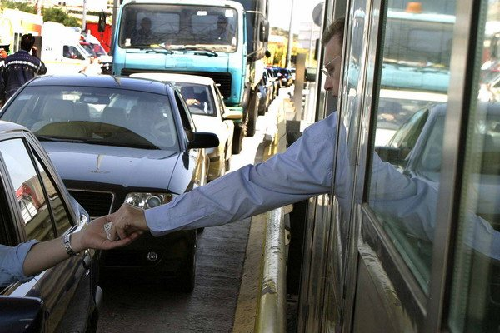 The route from Athens to Thessaloniki is going to cost more than 56 euros.
New toll increases are coming in 2014, with the new tariffs to be applied in all motorways. It is indicative that the tolls on the route Athens-Thessaloniki, Greece, by car will cost more than 56 euros, including the return.
The biggest rise will be applied to the basic route of Athens-Skarfeia, where the total cost will reach 23 euros.
The re-start of construction on the four biggest motorways in Greece, from the beginning of 2014, is accompanied by significant increases in tolls that range, depending on the route, up to 60% for all types of vehicles.
Yesterday, the Minister of Infrastructure, Transport and Networks, Michalis Chrysochoidis, submitted new revised contracts to the Parliament, which are scheduled to be voted on within the first ten days of December.
These contracts, will enable the restart of the construction, which is expected to cost the Greek government — directly or indirectly — about 2.2 billion, which will derive from either Community resources or from loans. In addition, new toll rises are to be imposed on road users.