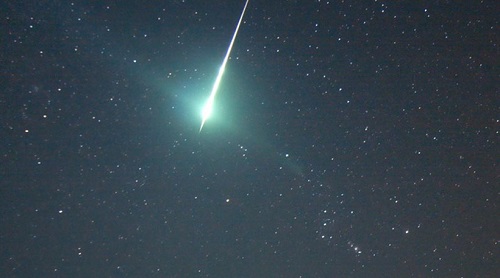 Many residents of Western Greece experienced a unique and incredible phenomenon at 9pm yesterday evening. Meteorologists spoke of a meteorite that was to fall in the Ionia sea.
The phenomenon was particularly noticed from the residents of Zante in the regions of Maheradou and Alikon. The residents said that they saw bright streaks across the sky from West to East, followed by an intense noise. However, there were no damages or problems reported even though the testimonies supported that the glow illuminated the homes of areas in Kefalonia.
Those who saw the bright object talked about a huge burning ball that was moving with tremendous speed. Many of them supported that they also heard a strange hollow noise. According to sources, it was a meteorite that fell in the Ionian Sea between Zante and Kefallonia.
The Fire Service of Kefalonia reported the testimony of a resident, who described the drop of a bright object in the sea between Kefalonia and Zante.
Geology Professor, Dr. Efthimios Lekkas, confirmed the phenomenon. He also pointed out that we could learn more about the meteorite after it has fallen to the ground. “I believe that it was a meteorite. Reliable witnesses of Zante and Kefalonia told me that  at 9pm they saw a bright object fall from the sky into the sea, followed by noise. All the testimonies that I received revealed the same thing.”