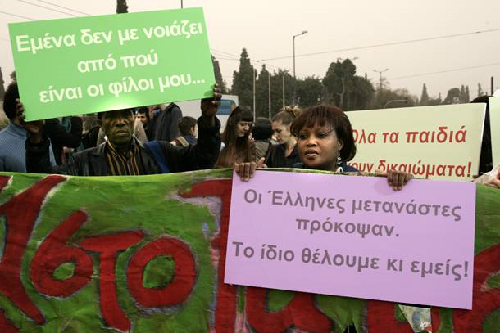 New Democracy, PASOK and DIMAR are in favor of the anti-racism bill. Those who are opposed to it are SYRIZA, KKE and Golden Dawn, while the Independent Greek party remains skeptical on their stance.
Τhe MP of SYRIZA Zoi Konstantopoulou accused the government of introducing the bill without consulting anyone, requesting the formation of a new bill with the participation of the related bodies.
“You represent what the bill is opposed to. We don’t need democracy lessons from you,” stated the MP of New Democracy, Thanasis Davlouros.
“The principle of majority rule states that it is not a requirement for the bill to be discussed,” replied the chairman of the Public Administration, Kyriakos Virdivakis.
In a short statement from the Ministry of Justice, Charalampos Athanasiou, stressed that the aim of the bill is to combat racism and xenophobia and to promote the harmonization of the Greek legislation within the frame of the 2008 decision made by the European Union.
SYRIZA strongly disagreed with the procedure, the number of the bodies invited, and also about the time of their hearing.
Finally, the Minister of Justice said that he is open to changes as far as the anti-racism bill is concerned. He also stated that the bill refers to crimes committed during genocides. This not only concerns genocides that have been officially recognised with irreversible decisions by international courts, but also those that are recognised by the Greek Parliament and genocides that may occur in the future.