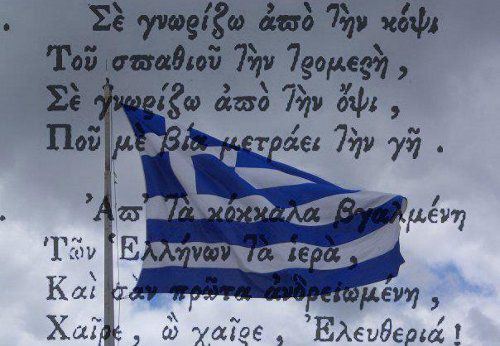 The Greek national anthem became a victim of political and online commercialization. The deputies of Independent Greeks, Ioannis Dimaras and Terens Kouik announced that whoever uses the national anthem in online platforms, must pay to a private company holding copyrights of the Greek national anthem.
The Culture Minister Panos Panagiotopoulos noted that the national anthem has a symbolic character and cultural value to every Greek, assuring that all necessary measures have been taken to fully protect the national anthem.
Panagiotopoulos declared “there is an attempt to make political use of the national anthem but it is not simply a national creation. It is the soul of the nation. It is our national identity and belongs only to Greeks,” adding that “we have already intervened on this issue and online platforms have recognized and admitted their fault.”
He pledged that by the end of the year an Organization of Copyrights Protection will be set up.
The plenary of the Parliament voted for the draft resolution of the Ministry of Culture which provides integration of community directives on copyright and related rights.
The Ministry of Culture has also notified UNESCO of this issue.