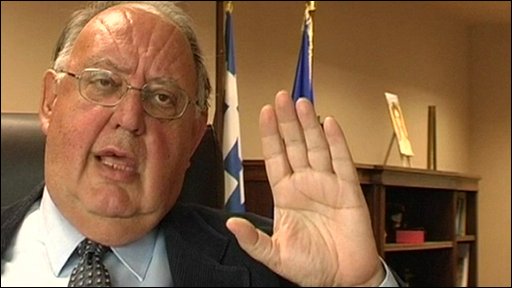 Outspoken former Greek Deputy Prime Minister Theodoras Pangalos, who served in a PASOK Socialist government from 2009-12 before retiring after his party took a beating in last year’s elections, said if the major opposition party Coalition of the Radical Left (SYRIZA) ever come to power that Greeks should fly out of the country on the next plane.
Pangalos, who didn’t mention that many already have fled Greece during a crushing economic crisis while his party serves in a coalition under Prime Minister and New Democracy Conservative leader Antonis Samaras, urged all Greeks to “get on a plane and go” if  SYRIZA leader Alexis Tsipras, who is opposed to austerity measures attached to $325 billion in two bailouts from international lenders becomes Premier.
Samaras has waffled over whether he wants Greece in or out of the Eurozone or whether it should tear up its deal with the Troika of the European Union-International Monetary Fund-European Central Bank (EU-IMF-ECB) which ordered big pay cuts, tax hikes, slashed pensions and worker firings that PASOK supports in opposition to its stated principles so it can hang on to what little power it has left, critics have said.
Pangalos said SYRIZA would finish the ruination of the country although that’s already been blamed on New Democracy and PASOK for packing public payrolls with hundreds of thousands of needless workers for generations in return for votes, imploding the economy.
“Otherwise, you will suffer the fate that will accompany the election of Mr. Tsipras. Those who can go abroad, I would advise them to do. Straight away. On the night of the elections. Because he will dissolve the county,” he said.
He said he wouldn’t take his own advice though and would stay as he has a comfortable pension and nice life although – perhaps with tongue in cheek for which he is noted – said he would “remain in Greece and endure his fate”.
Without elaborating on what period he means in Greek history, the former minister added, “The Greek people did this before. They will have killed themselves again.”
Pangalos claimed SYRIZA was trying to create “a parallel power” inside the country as the Communists did in Russia in 1917, and mentioned the ongoing strikes at Greek universities and the closing of the state broadcaster ERT and firing of all 2,653 workers, although that was done by Samaras and supported by PASOK chief Evangelos Venizelos, who first opposed it and then went along, for which he was named Deputy Prime Minister and Foreign Minister despite grumblings he had sold out.
Under the New Democracy-PASOK reign, Greece has fallen into a deep six-year recession with record unemployment, poverty, suicide and homelessness although Samaras said he’s carving what he called a “success story” and will lift the country out of despair.