Kouvelis Open to Participate in a Left-Wing Government 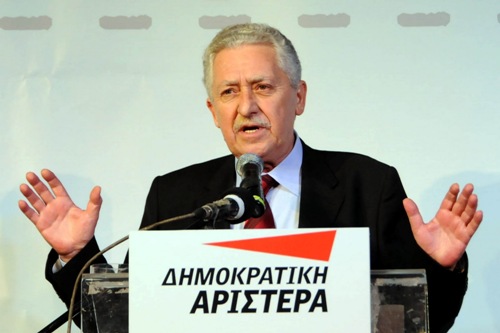 The accusations of the Greek coalition Government that SYRIZA’s leader, Alexis Tsipras, tried to encourage an “apostasy” of coalition MPs who are disgruntled with the current policy, are changing the rules of the current political scene.  The president of the Democratic Left (DIMAR), Fotis Kouvelis, openly supported Alexis Tsipras and rejected the government’s accusations that the major opposition party is encouraging an “apostasy.” In the meantime he left all options open towards a possible post-election cooperation of his party with SYRIZA.
In particular, Alexis Tsipras’ invitation to PASOK MPs, who are frustrated with the current policy, to abandon the government and join forces with his party was characterized  by Fotis kouvelis  as “a political intervention” and not as a call for “apostasy.”
DIMAR’S president speaking in Action 24, during a political show that was projected last night, was asked to comment on PASOK’s accusations of “apostasy” and he answered:
“No, there is not an apostasy. The major opposition party made a political intervention, asking from Government’s MPs to abandon the coalition and to oppose to the Government’s current policy. The way that the major opposition party chose to make this political intervention might not be politically correct, but this does not mean that we can characterize it as an apostasy. The accusations of the Greek coalition Government that SYRIZA encourages an “apostasy” can lead to an unstable political scene.
Fotis Kouvelis was also asked to comment if his party would join a left-wing government, and DIMAR’s president seemed positive if such an opportunity arises. He said: “Greece has abandoned governments that consisted of a single political party. Greece needs governments of cooperation. We proved that in July 2012. However, it is obvious that coalition governments must have the spirit of cooperation and not act as a government based on a single political party. This spirit of cooperation must be reflected on the exercising policy by each coalition government.”