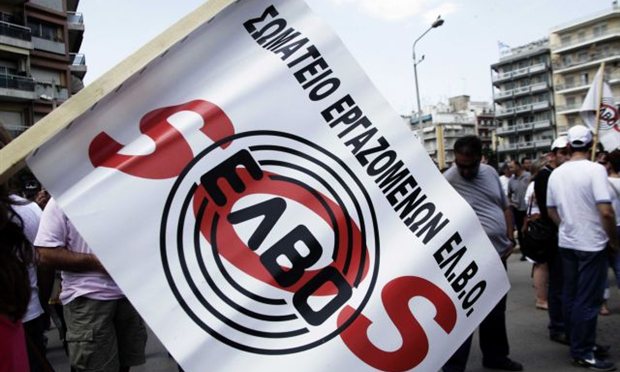 Faced with a looming budget gap that could be five times more than what Greece has estimated, international lenders are pressing the government to close two defense industries or significantly reduce their workforce and costs.
The government is eager to save its Hellenic Defence Systems (EAS) — weapons and ammunition producer — and the Hellenic Vehicle Industry (ELVO) and has offered a plan to reduce their costs.
But the Troika rejected the plan that aimed to overhaul EAS, citing the industry’s weak presence in international markets, and insisted the government reduce its workforce from 900 to 341.  The Troika said it is not possible to save the two industries, describing them as a drain on government coffers with a reputation of inefficiency.
The full impact of the austerity measures will not be known until Greece and the Troika actually agree either to close down the industries or cut back their workforce, said Ioannis Michaletos, a defence specialist for the Institute of Security & Defence Analysis in Athens.
“The most important aspect is the decreasing defence cuts in conjunction with the inability to reconstruct the defence strategy so as to minimize impact without reducing firepower and alertness capabilities,” Michaletos told Southeast European Times. “I believe that the Greek defense ministry can do it if it slashes unnecessary formations. This has already started but it is slowly enforced,” Michaletos said.
Prime Minister Antonis Samaras has been adamant about not having any more austerity, despite moving ahead to suspend, transfer or fire 40,000 public workers. Finance Minister Yannis Stournaras said Greece’s 2014 budget gap is 500 million euros and can be fixed with social security cuts and other unspecified reforms as well as better tax collections, but the Troika said the budget gap can reach 2.5 billion euros.
Greece spent 2.5 percent of its GDP last year on defense – nearly 5 billion euros – and much of that sum on its own state industries. Stournaras said the defence industries should be given time to crawl toward profitability by being export oriented at the same time the government was set to spend 144 million euros on buyouts at EAS, a sum considered too high by the Troika.
The government also wanted to spend 27.5 billion euros on ELVO until it could obtain new orders; it has no orders at present. Meanwhile, the government put forth another proposal to the Troika, saying it aims to reduce the retirement bonuses at the defense industries.
It provided new data saying the two industries are better off than it appears, claiming it can make EAS profitable in two years. But the Troika said it is skeptical. As for ELVO, it stated that “an outright bankruptcy of the company is the most desirable and realistic solution.”
Some defense experts said they worry that focusing on cost-effectiveness will affect Greece’s national security, and national defense will be compromised if Greece no longer has a home-grown industry.
“The defense industry in Greece, as it happens everywhere, is part of the defence and security of the country. If it vanishes, the dependency on foreign materials only increases the security problem,” retired Vice Admiral Vasilios Martzoukos told SETimes.
Austerity has to be applied carefully to defence, he added. “It is one thing to make the companies healthy by radical changes inside, but that’s completely different from closing them,” Martzoukos said.
(Used by permission of Southeast European Times, www.setimes.com)