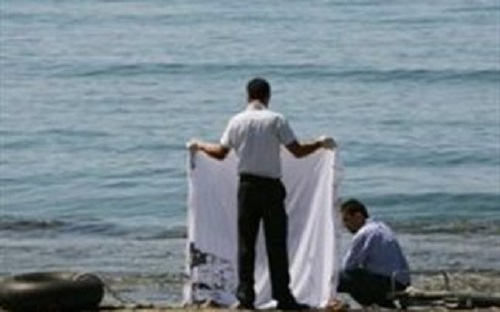 Police arrested two men in Lefkada who are accused of taking part in the human trafficking of 27 illegal migrants to the region of Palairo in Aetolia-Acarnania, where 12 people lost their lives. Police also seek another three men.
During the ongoing investigations in Aetolia-Acarnania, police arrested a 30-year-old man, a resident of Konopina, who seemed to take part in the trafficking of migrants to the rocky coast of Palairos. Furthermore, a 58-year-old man of Palestinian origin, who was among the survivors, was arrested by the policemen, who apparently tried to convince police that he was among the migrants who tried to reach Italy. Police are still looking for 2 Greeks and 1 Egyptian suspected of loading 27 migrants onto the small boat.
According to sources, the 27 migrants, after arranging the meeting point with traffickers, started to make their way from Athens by bus. The immigrants met with the traffickers in a region near Amfilochia, and then boarded in a closed van and two cars. They then went to  Palairos, where they boarded the boat.
After the sinking of the boat, the traffickers tried to escape and left their cars in different regions. Police managed to arrest the 58-year-old man.
The 15 survivors do not appear to have any particular health problem, while people and voluntary organizations of Lefkada and Preveza are mobilized in order to provide humanitarian aid.
The bodies of the 12 passengers, including 4 children, have already been transferred into the General University Hospital of Patras for autopsy and dissection, while the Greek Authorities are in contact with the embassy of Syria in order to discuss the procedure of transporting the deceased.