40th Anniversary of the Heroic Uprising 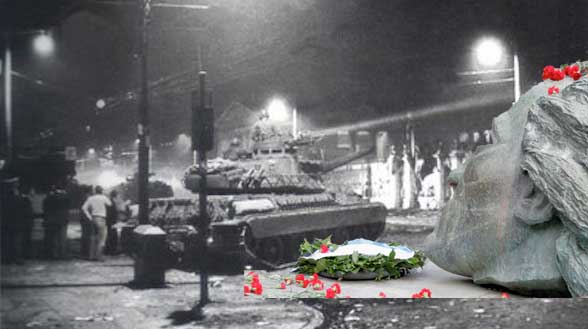 Forty years have passed since the uprising that took place on the 17th of November 1973 in the Polytechnic School of Athens, Greece. It was a soul-stirring act of resistance against the tyranny of the Military Junta. It was an act of heroism that should teach and inspire next generations. Especially now that the students’ slogans, such as “Bread-Education-Freedom” take on new meaning, reflecting the tragic actuality and impoverishment of the Greek nation.
On the 21st of April 1967, a group of colonels, Brigadier General Stylianos Pattakos and Colonels Georgios Papadopoulos and Nikolaos Makarezos, seized power with the coup d’état. This happened just seven days after the dissolution of the Hellenic Parliament and right before the scheduled elections. Already, during the first year of the Colonels Regime there were many people exiled for “plotting” against the regime and bombing attacks against the Junta officials. Four different governments succeeded one another during the seven-year Junta and they were all condemned by the Council of Europe before Greece’s withdrawal, in fear of suspension that would last until 1974. Other traits of this regime were the suppression of basic freedoms, such as the right of assembly, widespread censorship and a pseudo-referendum for the ratification of the so-called Constitution. During the Seven Years, as this period is known, there were a lot of murders and attempted murders on both sides that climaxed on the 17th of November 1973, at the Athens Polytechnic School.
During the Junta, Universities were combed out. Any professor that was against the regime or expressed ideas that were deemed aggressive by the regime was fired. Any student who wouldn’t pledge allegiance to the regime was not allowed to attend university. The uprising that ultimately led to the fall of the Colonels Regime, began on February 1973, at the Law School in Athens. The students took over the University building, because of a new law regulation that enabled the government to revoke military service postponement. This event would herald the Polytechnic Uprising. On the 14th of November after the regime refused to allow the student body election, more than 5,000 students gathered at the Polytechnic School and decided to take it over in an act of resistance. More and more people were gathering to show their support towards the students, shouting slogans against the Junta. On the 16th of November the Polytechnic School radio station starts emitting in all of Athens spreading the message of the Resistance. Their main goal was the overthrowing of the Military Junta and the reinstatement of Democracy. The police issued a curfew that forbids people from being in the center of Athens, placing military tanks in key spots around the School. Around 2:50am, on the 17th of November, the commanding officer signaled, and a tank moved forward bringing down the gates of the Polytechnic School allowing for Special Police Forces to enter. After the riot that lasted 30 minutes no one was left in the School.
The Military Junta was not done yet. One of its main goals was to unite Cyprus with Greece. In its final attempt, the organized coup d’état overthrew the Cypriot President–something that resulted in the invasion and occupation of the north part of the island by the Turkish army. Meanwhile, in Greece, the Junta had just fallen due to the Cyprus fiasco.
These events should be taken under consideration, especially now, in light of recent events that the Greek nation is called to endure. Difficult times lead to extreme measures and usually make people question the ability of the government to conserve democracy.
[youtube]nDqxGxQPM2s#t[/youtube]