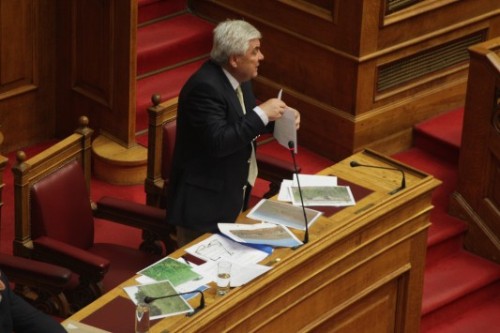 The decision which allows Canada the use of the name of Greek products with protected designation of origin (PDO), like feta cheese and Kalamata olives, caused reactions even among the MPs of the New Democracy political party.  Athanasios Tsaftaris suggested that the Greek Vice Minister for Development and Competitiveness, Notis Mitarakis, is responsible for this decision.
Strong reactions among the parliamentary groups, even New Democracy, caused the decision to grant the use of Greek products’ name with PDO, such as feta cheese and Kalamata olives, to Canada through CETA  (Comprehensive Economic and Trade Agreement) as it is described in the final texts of negotiations on the 18th of October 2013. For this reason the opposition parties called the Vice Minister for Development and Competitiveness to explain this matter to the parliament. What took many by surprise is that this demand was supported by many government MPs.
The members of the Standing Committee on Production and Trade expressed their different opinion on the matter and asked the Greek Minister of Rural Development and Food–Athanasios Tsaftaris–and the Government in general, not to confirm the final texts of the two-part negotiations between EU and Canada.
Mr. Tsaftaris expressed his personal concerns towards this agreement. He suggested clearly, that the one responsible for the external trade is the Vice Minister for Development and Competitiveness, Notis Mitarakis, as he handles matters in this sector.
Many MPs of New Democracy requested more effective policy in this domain, while Athanasios Petrakos, SYRIZA’s MP, warned the parliament that “in this way we allow other countries to use the name “feta” in their products too.” In addition, the MP of the major opposition party asked the government to exercise the power of Veto in this occasion in order to prevent any final agreement.