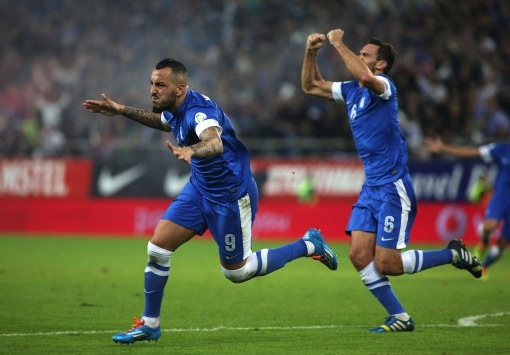 Greece won the first World Cup Qualifying Playoff game against Romania 3-1 in Athens. The players of the Greek Soccer team seem to be getting ready for the 2014 World Cup in Brazil as they have the first-leg advantage.
Greece went into the first leg at Georgios Karaiskakis Stadium in Athens full of confidence, having won their last six games without conceding a goal.Konstantinos Mitroglou scored two goals while Dimitris Salpingidis made the final score of the game 3-1. Stancu scored the goal for Romania.
Greece and Romania will meet again on Tuesday in Bucharest for the final game before the World Cup finals. Greece will have to lose with more than two goals difference in order to not qualify for the finals.
Greece has won seven games in a row although it missed out on automatically qualifying for Brazil 2014 as a result of inferior goal difference to Group G winners Bosnia-Hercegovina.
Romania haven’t appeared at a World Cup finals since 1998.
Greece: Karnezis, Torossidis, Papastathopoulos, Maniatis (Karagounis 77′), Holebas, Tziolis, Siovas, Katsouranis (Samaris 86′), Salpingidis, Samaras, Mitroglou (Gekas 80′). Goals: Mitroglou 14′, 66′, Salpingidis 20′
Romania: Lobonţ; Mațel, Goian, Gardoș, Raț, Bourceanu (Lazar 75′), Torje (Grozav 75′), Cocis, Stancu, Tanase (Maxim 87′), Marica. Goals: Stancu 19′
Watch the goals from the game: