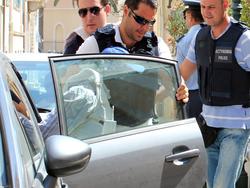 The Greek-American community has shown great interest to help the 16-year-old Myrto Papadomichelakis, who is hospitalized in Boston (Spaulding Hospital), recovering after a serious surgery.

Myrto was brutally beaten by Pakistani Ahmed Vakas and suffered serious head injuries. The tragic incident occurred in the summer of 2012 in Paros, where Myrto was on vacation with her mother and older sister.

Following the Youth Federation of Hellenic American Societies of the New England initiative, money was gathered to buy a special machine which will help Myrto’s nutrition and communication.

The story has touched the Greeks of America. In these last days, there has been interest in showing Myrto’s need to explore every treatment method and improve the state of her health.

The Greek Minister of Health –Adonis Georgiadis– gave his approval to continue the hospitalization of 16-year Myrto Papadomichelakis in the Spaulding Sanatorium in Boston until the end of December, as requested by her attending physician.