Greece Will Force Universities To Open 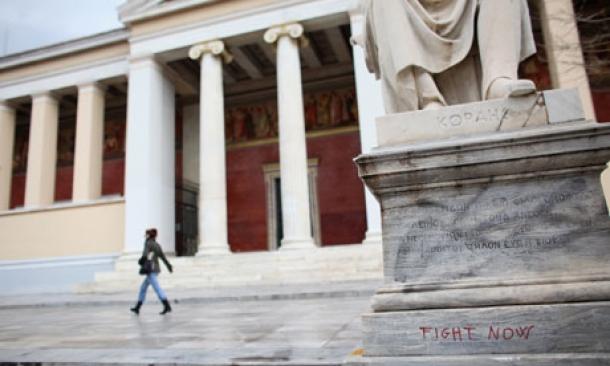 Greek Prime Minister Antonis Samaras, who this year issued civil mobilization orders to force striking Metro and port workers to return to work under threat of being arrested or fired – and prevented a planned teachers strike – has run out of patience with administrative staff whose refusal to work in protest over government plans to suspend or fire 1,300 workers has kept nine universities shut down since the school year was supposed to have started in September.
Samara will issue another order forcing the striking staff at the Athens University and the National Technical University of Athens (NTUA), whose work stoppage is in its 10th week, to get back to work or else, the newspaper Kathimerini said.
Staff at the two institutions are protesting government plans to place more than 1,300 university office workers into a labor mobility scheme, though professors at the NTUA, who had been striking in solidarity with the workers, returned to work this week in a bid to ensure the start of the semester while those at Athens University had decided to come back next week.
But with the administrative staff saying they would stay out – while being paid the whole time – the schools could not have resumed normal operations. And while some professors at Athens University returned to work this week, there weren’t any classes being held.
The union representing students affiliated with the ruling conservative New Democracy of Samaras, DAP-NDFK, called on rectors to “to rise to the occasion, even at this late hour, to cooperate so that the universities can open.” Sources said the students might also take legal action.
Their cause has attracted public support too with more than 25,000 citizens having signed an online petition – at www.anoixtessxoles.gr – in favor of the institutions reopening. Education Minister Constantinos Arvanitopoulos blamed the major opposition party Coalition of the Radical Left (SYRIZA) for directing the strike to get at the government.
“It is evident that the main opposition is unable to assume the responsibility of its institutional role,” he said, accusing the party of creating an atmosphere of “polarization and open confrontation.” Arvanitopoulos said SYRIZA was exploiting the “sensitive area of education” once again to create upheaval.
In comments to Vima FM, the rector of Athens University, Theodosis Pelegrinis, noted that the Senate had voted in favor of lessons resuming “as long as administrative staff allow access to the classrooms.” He added: “So I’m not misunderstood, they are absolutely justified,” he added, supporting the strike however.
Civil mobilization orders had rarely been issued before Samaras took power and he uses them routinely to force workers to return to the job or stay on it in an effort to block strikes.