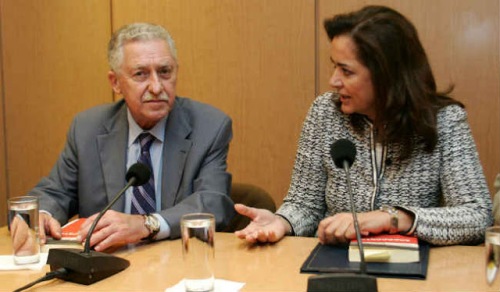 Dora Bakogiannis, New Democracy’s MP in an interview she gave at Realfm 97.8 earlier today, stated that Democratic Left (DIMAR) must return to the Greek coalition government. She urged the Greek Prime Minister to take initiatives in order to convince DIMAR’s leader Fotis Kouvelis towards this direction.
“It is a very difficult and crucial period for our country. From the parliamentary discussion that was made within the frame of SYRIZA’s censure proposition, we can be sure of two things. First of all, the quality of the parliamentary debate was below people’s expectations, and secondly, the major opposition party, SYRIZA, has no alternative and certainly not any reliable proposition for when it comes to power. However, we must do everything within our power to support the current government in order to continue its work, and be more effective to achieve the goals that have been set. In my opinion, this can only be achieved by taking political initiatives” underlined Mrs. Bakogiannis.
She continued: “Such political initiative is to call Democratic Left, which is in fact the responsible left, to a meeting in order to achieve a new strategic agreement, and be once again an integral part of the coalition government. This is how Greek Prime Minister, Antonis Samaras should act. The government is in need of a bigger parliamentary majority, in order to endure. Only by convincing Fotis Kouvelis and his party to join the coalition government under a new strategic agreement, can we be certain that the government will endure for the next two years.”

An earthquake measuring 6.0 on the Richter scale shook central Greece near the town of Elassona at 12:16 local time on Wednesday.
Greece