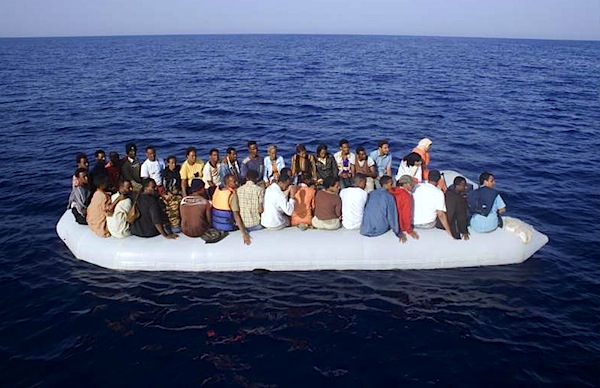 According to NGO Pro Asyl, Greek authorities push back refugees who attempt to enter Greece illegally. This practice is against international laws and is also used by Italian authorities who push back immigrants when they are trying to enter the Italian border through Greece, notes the organization.

“Refugees are brutally pushed back by Greek authorities. This is happening systematically with the complicity of other European authorities despite the fact that it is against the international law” notes the German Non-governmental organization Pro Asyl.

Based on interviews with refugees, it was indicated that the majority of people who were prevented from entering Greece, by land and sea and in many cases ill-treated by the Greek authorities, were Syrians.

The report focuses on the barriers to accessing the territory of the European Union for people seeking international protection, and particularly on the prevailing situation at the EU land and sea borders in Greece. It describes and analyzes the fatal consequences of the closing of the land border in the Evros region, which has led to a shift in flight routes to the Aegean sea route since August 2012. Reports of illegal push-backs of refugees from Syria, Afghanistan, Somalia and Eritrea have increased in the same period, and this pattern is also corroborated by the findings of this study, reads the document.
The major finding of Pro Asyl’s investigation is that illegal push-backs from Greek sea and land borders occur systematically.

Greece has been accused of such blatant human rights violations before. However, the brutality and the extent of violations found in this report are shocking. Masked Special Forces officers are accused of ill-treating refugees upon apprehension, detaining them arbitrarily without any registration on Greek soil and then deporting them back to Turkey, in breach of international law. In 5 fact, there are “grey” zones where refugees are detained outside any formal procedure; in practice these refugees don’t exist.

The report also accuses special units of the Greek coastguard who ” abandon refugees in Turkish territorial waters without consideration for their safety.”

Push-backs take place from Greek territorial waters, the Greek islands and from the land border. The majority of the victims are refugees from Syria – men, women, children, babies, and people suffering from severe illness. While the EU publicly repeats its commitment to stand by Syrian refugees, their fundamental human rights are being ignored and violated at the European border.

The research was conducted between October 2012 to September 2013 in Germany, Greece and Turkey. The percentage of the interviewed people who claimed that not only were pushed back but  also were abused by Greek coastguard and border patrol officers  is astonishing high and the scale of the brutality and human rights violations involved in these incidents is shocking, says Pro Asyl.
The research team conducted 90 interviews with people who claim to have been pushed back from Greece to Turkey, either from the land or sea borders, or in some cases, both. The interviewees were Syrian (49), Afghan (32), Somali (5) and Eritrean (4) refugees, who claim to be in need of international protection. Among them were 12 women (three of whom are single mothers and three of whom are pregnant), 78 male refugees (one of whom has been diagnosed with metastatic cancer), 12 families, five unaccompanied minors and three elderly people.
Out of the 90 interviewees, a total of 76 reported that they had been pushed back once (16 from the Evros region and 60 in the Aegean sea – 19 of the latter could not specify the island where the push-back took place, yet 21 mentioned Farmakonisi, 14 Lesvos, three Chios and three Samos). The remaining 14 interviewees reported to PRO ASYL, that they had been pushed back more than once, in most cases first from their first entry point at Evros and subsequently from Lesvos.
The interviews were held in Athens, the northern Aegean islands (Greece), Izmir (Turkey) and Frankfurt (Germany). PRO ASYL mainly concentrated on the Aegean area, where an increase in arrivals has been registered since August 2012.

Here is a summary of the findings of the “Push Back” report as conducted by Pro Asyl:
• Push-backs, as described in this report, are systematically carried out by the Greek authorities.Refugees are pushed back to Turkey: a) from the Greek territorial waters, b) from the Greek islands, c) from Farmakonisi military island after being detained incommunicado, d) after a distress alert is launched from their boats, or e) in the Evros area at the land border directly after their arrival on Greek territory via the Evros River, either in the forest where they are trying to hide, or while walking in the streets of the first village they reach.
• According to the interviewees’ eyewitness accounts, it can be estimated that over 2,000 persons were pushed back, given the make-up of the groups they traveled with.
• The vast majority of those affected, according to our research, are Syrian refugees trying to enter Europe to seek international protection and to reunite with their families who live in various European countries.
• In many cases, either on coast guard boats, islands or in informal detention places in Evros, refugees were arbitrarily detained for some hours, without being officially registered, without access to the outside world and without any food or water. In all cases, push-back victims were not officially registered by the competent authorities, nor were they asked for any personal details, apart from their nationality.
• All of the interviewees stressed that they were not heard by the Greek authorities and that they were not afforded an opportunity to request international protection or to challenge their illegal removal.
• In the majority of cases, the pushed back refugees claim to have been left in life-threatening situations upon being pushed back in the Aegean, when left adrift in unseaworthy boats or being thrown into the water of the river Evros.
• In the Aegean, in almost all cases, the officers involved in the push-back operations wore “black uniforms, carried guns and wore full face-covering masks”. In other cases, officers were “wearing blue uniforms’’. In Evros they were described either as wearing blue, military green or dark green uniforms, accompanied by some people in plainclothes, and others wearing full face masks.
• The majority of the interviewees claimed that they had been ill-treated. In the case of those who were pushed back from the island of Farmakonisi, the severity of the re- ported ill-treatment towards nine male Syrian refugees could amount to torture.
• In three reported push-back incidents from Farmakonisi – an uninhabited island, apart from a military unit – involving dozens of refugees from Syria, interviewees claimed to have been apprehended by Greek coastguards either just off the coast of the island, or after their arrival on the island. The refugees say that they were detained incommunicado and deprived of any rights for periods ranging from 16 hours to three days, before being pushed back and left adrift in Turkish waters.
• The interviewees alleged that their personal belongings (mobile phones, money, etc.) were taken away.
• Many Syrian refugees alleged that their documents were also taken away. Without proper ID cards and passports, it is quite impossible for them to now benefit from potential humanitarian admission programs, or a more generous family re-unification program granted by some European states.
• During push-back operations in the Aegean Sea, some refugees claim to have dialed the emergency number, and sent out distress signals from their boats, only to be pushed back when they were located by the Greek authorities.
• Refugees reported being forced, and even threatened with guns, to return to Turkish waters.
• Once pushed back to Turkey, refugees reported being arrested and eventually detained by the Turkish authorities. In three cases – two in Evros and one in the Aegean – pushed back Afghan refugees were deported back to their countries of origin (chain refoulement).
• During their stay in Turkey, refugees were confronted with an ineffective refugee protection system, subjected to deploring living conditions and exposed to a series of other human rights violations.
• Most tried to enter European territory again after having been pushed back, and were therefore exposed to further risks.

Pro Asyl, a member of the European Council on Refugees and Exiles (ECRE), estimates that some 2,000 refugees were pushed back from Greece’s land and sea border with Turkey since the organization began its investigation.