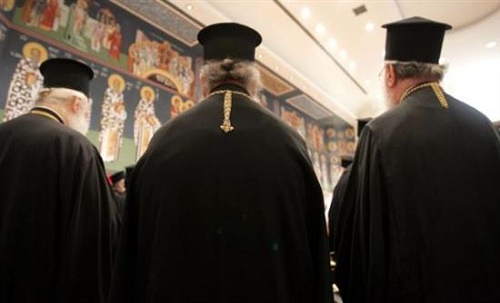 Two priests were arrested in Trikala and then convicted by Larissa’s Court of Assize to 18 years and 6 years imprisonment on charges of embezzling a total of 930,000 Euros that were destined for the payroll of clergymen in Farsala.
According to the indictment, the two priests from Farsala, who were responsible for collecting and paying salaries of clergymen in the Metropolis of Thessalia, submitted false documents to the Tax Office by exploiting the fact that the salaries of priests are outside the budget. Having paid their priests the amounts that they were entitled, they kept the extra money reaching a total of 710,000 Euros for one and 220,000 Euros for the other!
The first priest, who was responsible for the payroll in Farsala was sentenced to 18 years of imprisonment for fraud, forgery and use of forged documents. The second one who was responsible for collecting-cashing money from the Tax Office of Farsala and the NBG in Farsala was sentenced to 6 years imprisonment for complicity in fraud.
The court also imposed a compensation of 710,000 Euros by the first priest to the Greek government, which appeared as a plaintiff and 220,000 Euros from the second. Those where the amounts they received and appropriated during the period of January 2012 through June the same year (June 25th) when they were eventually arrested. Furthermore a compensation of 2,000 Euros to the Greek government was imposed to each priest for the loss caused by their actions.
The case was unveiled in June 2012, when Tax Office officials informed the police department of Larissa of suspicious alterations on the documents for the payroll of the priests.
The two priests submitted the documents for the priests’ bonuses and instead of the correct amount of 8,864 Euros, the document was forged to read 28,864 Euros.
In consultation with the police, Tax Inspectors confirmed the amount and when the two priests went to the bank to collect the money to pay their priests and to keep 20,000 Euros, the police intervened and arrested them.
A personal seal along with one of the Metropolis was found in possession of the 38 year-old priest while an investigation of the 36 year-old priest’s house brought to light a number of original receipts.