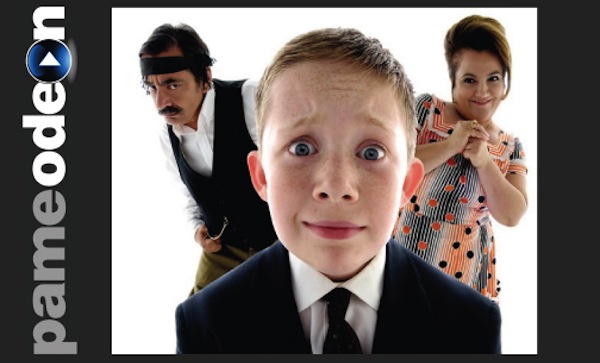 The Greek leading film distributor and producer, Odeon S.A., and Greek Reporter have teamed up to promote Greek cinema to a new worldwide audience, through PameOdeon.gr, the new video on demand platform.
For this Greek Movie Friday we present you the Greek comedy “Little Greek Godfather.” Eleven year old Alex is the son of a famous politician who travels to the island of Crete to baptize the baby of a local parliamentary candidate.
The reason young Alex is chosen to baptize the child, is to help his father–a politician– in the future elections, by making a good impression on other candidates. Although everyone sees Alex as a boy who can’t be trusted for this so-called “mission,”Alex repeatedly reassures them by saying “I am young but strong!” He is determined to be the Godfather and prove to everybody–mainly his father–that he can do it!
In order to encourage his young son to do the best he can, the famous political leader gives him the advice : “Our words are our power. With what we say, we win or lose the battle!” But this could be a problem….Alex, who was raised in California, not only doesn’t speak Greek well, he has a harder time understanding the Cretan dialect as well as the cultures formalities.
This movie is based on the autobiographical book “Deka mithoi kai mia istoria” (Ten Myths and a History) by Greek writer Nikos Papandreou–son of Greek political leader Andreas Papandreou. It focuses on the book’s first chapter “Oi Agioi Pantes” (All Saints). The book was a hit, with 51 editions published since 1995, and has also been translated in English and German. The movie shooting took place in the writers hometown of villa Galini Kastri, and in the actual house where he lived with his famous family
Alex’s adventure takes him through a funny voyage, as he puts in a great effort to speak and act like a real Greek. Through trial and error, he finally passes the test and is accepted as a worthy son of the Leader.
In Greta island, a determined and  smart boy learns many precious things about himself and what he really wants out of life; simultaneously he tries to hang on to his spontaneous, childish attitude which make him who he is. The love for his father and for democracy push him to far lengths, and a new friendship reveals what he is meant to do with his life.

Follow the steps below to watch the film:
PameOdeon.gr makes it easy to watch your favorite films with 5 easy steps:
• Visit PameOdeon.gr
• Register a new account or login into your existing one.
• Browse more than 200 Greek films.
• Purchase a discounted program or choose pay per view.
• Choose your favorite film to watch.
• Enjoy!