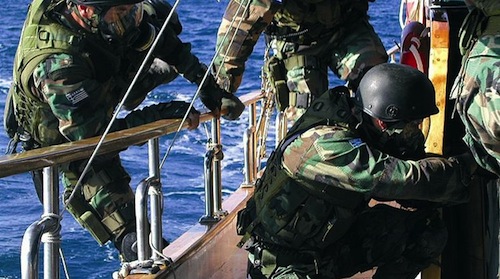 According to sources, the cargo ship “nourm” flagged with Sierra Leone, transferred a large amount of weapons. It was identified yesterday evening near Imia and was escorted to the port of Symi this morning.
After an investigation, the cargo ship had troubled the authorities in the past for drug trafficking and when the port board appeared, changed its direction.
Eventually, the ship stopped and was led to the port of Symi, under the port escort. The ship had started from Ukraine with destination Eskenteroum in Turkey, carrying 20,000 AK 47 guns (Kalashnikov)
Moreover, some containers were found and there could be a large quantity of explosives in their interior. The ship is currently being transported to the port of Rhodes for a thorough check.
It is noted that there are contradictions regarding the final destination as the system marin trafik declared the port Tartus, in Syria. Another electronic system indicated the destination to be Tripoli, in Libya, while the captain declared Eskenteroum Turkey! Constant updates are being given to the Minister of Shipping, Maritime Affairs, and Aegean Varvitsiotis, while an official announcement is expected.
Recently, the port control has been intensified in the east sea border of the country by order of the Minister of Marine, due to geopolitical developments in the eastern Mediterranean.