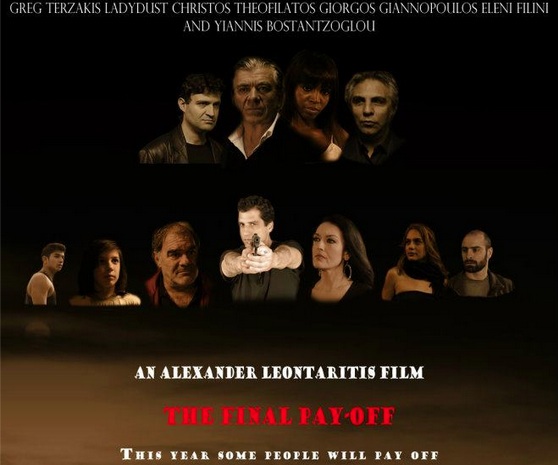 The Final Payoff, the first feature film directed by Alexander Leontaritis won the Audience Award at the 8th International Film Festival of Cyprus. The movie was also nominated in other categories as well (best first feature film, best performance, set, costumes).
“It was a great honor for us to participate at the Cyprus Film Festival and to get this award. We had to face many difficulties from the start because of the very low-budget we had. I am glad that all the team effort made in order to shoot this movie, has started to gain recognition” said the director and co-producer of the movie Alexander Leontaritis.
“We love the festivals that love independent movies. Cyprus gave us a really warm welcome. We are very happy we had positive feedback from the audience in the first official public screening of the movie” added the co-producer and actor in the lead role of the movie, Greg Terzakis.
The movie is about an ex-boxer, Greg who works for a strong loan Shark in Athens, Markos. He and his partner are assigned the difficult task of collecting money and interest from borrowers. They both come across everyday people who have been affected by the financial crisis, receiving loans which have to be paid off by certain deadlines.
The movie will participate in the Film Market of Thessaloniki’s Film Festival as well, and a theatrical release is to be planned soon in Greece.