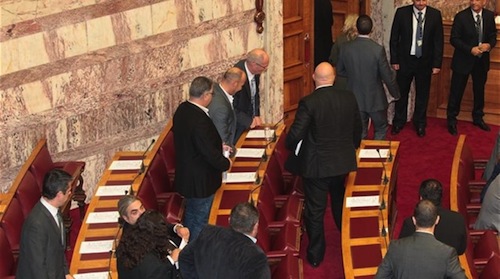 Zaroulia is charged for illegally carrying a bullet inside her bag during a visit to her husband and Golden Dawn party chief Nikos Michaloliakos, who is currently under custody at Korydallos Prison. Nikos Michaloliakos is under pre-trial custody along with Christos Pappas, second in chain of command of the Golden Dawn party.
Elias Kasidiaris, Elias Panayiotaros and Eustathios Boukouras are facing charges of rioting. Two hundred and thirty-six MP’s took part in the voting process. Concerning the three cases of Eleni Zaroulia, Elias Panayiotaros and Eustathios Boukouras, 235 votes were in favor of lifting their immunity. The votes regarding Elias Kasidiaris were counted at 234 in favor of lifting his immunity.
The tension rose when Ilias Kasidiaris gave a brief speech in which he said that it is unacceptable and against the constitution for the House Speaker, Christos Markoyiannakis, not to call out the names of Michaloliakos and Pappas during the voting procedure. He underlined that the two Golden Dawn MP’s were elected by Greek people and he has no right to ignore this fact. After his speech the ultra nationalist MP’s of the Golden Dawn party walked out of the session as a gesture of protest to the House Speaker, Christos Markoyiannakis.
However, Markogiannakis argued that the names of the imprisoned Golden Dawn MP’s were announced during a second reading of the MP’s list.
Immunity was also lifted for the Independent Greeks deputy Vassilis Kapernaros, while a similar request for SYRIZA MP Maria Diakaki was rejected.