Donation of 500,000€ for Winged Victory of Samothrace 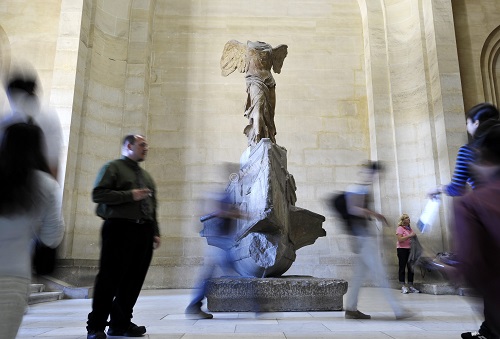 The administration of the Louvre Museum announced that during the last two months they were able to raise the amount of 500,000 Euros for the restoration of the statue of the Winged Victory of Samothrace.

The “Everybody Can Be Maecenas” campaign was launched on the 3rd of September in order to preserve the famous statue, one of the jewels of the museum. Its aim is to raise the amount of one million Euros from private donations, until the end of December. The total amount required for the restoration of the Winged Victory of Samothrace is four million Euros.

The half million Euros were collected from private donations within two months, which is very encouraging, stated the museum. So far 4,000 people have offered from 5 to 5,000 Euros each. The Louvre has invited all the art-lovers to become ambassadors of the campaign on social networking sites. So far, 218 ambassadors have created their own pages that invite people to offer money.

This September, the statue was moved from its usual exhibition area to an adjacent room where a special maintenance cabin has been built. It will return to its original place in late June or early July 2014.