TechNews
GreekReporter.com Greece "Attitude Towards Roma Similar to that of Second World War"

"Attitude Towards Roma Similar to that of Second World War" 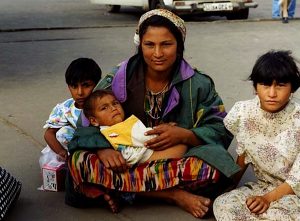 The story of the little blond girl, Maria  found in a Roma camp in Farsala, monopolized the Greek and international media for several weeks and revealed a tough reality. Racial discrimination towards Roma, or Gypsies as they are often called, are still continuing in Greece and in many European countries.
Erika Schlager, an expert on issues concerning Roma rights and legal adviser of the U.S. Commission on Security and Cooperation in Europe, spoke to the “Voice of America” about this phenomenon.
Erika Schlager has visited Greece and many of Roma camps in different parts of the country. “Poverty frightens and marginalizes” she says. “The world will always see poverty as part of the Roma identity, and this is fueling the creation of stereotypes.” The poor Roma stand out, while Roma who are integrated into society pass unnoticed.
She believes that the way in which the media presented the story of the little blond girl and the debate that followed, caused a negative reaction towards Roma, not only in Greece but also in other European countries. In Ireland and in Serbia, children were removed by force from their Roma families because they didn’t resemble their parents. However, after DNA tests, it was proved that they were their biological parents.
Schlager  notes that media’s and society’s attitude towards Roma is still similar to that of the  Second World War, which led to the genocide by Nazi Germany. About half of the Roma population died in concentration camps.
The prejudices of the past are still continuing. Many in Greece believe that Roma do not want to be assimilated. Schlager disagrees and believes that it is the prejudices that shape our perception about them.
She claims that Roma want to be assimilated and educate their children, but many times the access of Roma children in schools is difficult. The Greek government has taken measures for Roma education in Greek schools, but these measures are not always implemented.
Roma is the largest minority in Europe, amounting to 12 million. Their integration in the workforce of Europe will have a beneficial impact on the economy.
In Europe, there is a well-organized movement concerning the protection of the Roma rights. The European Roma Rights Centre in Budapest. According to Schlager, the next step is the creation of local organizations in different countries that could fight for Roma rights, from the inside.