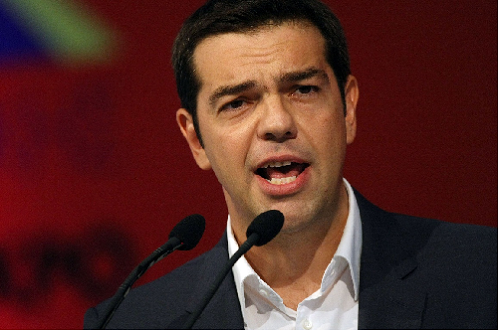 Speaking on Monday evening at an event at the University of Texas, on whether or not the euro can be saved, the opposition leader Alexis Tsipras assured, that Greece under a government of SYRIZA, would not attempt to leave the Eurozone.

Tsipras hinted that the conditions under which the Eurozone was created, may have been a mistake from the start. “Today, the Eurozone exists. We have an economic union and a common currency, and other available alternatives are worse” said Tsipras when answering to the question: In or outside the Eurozone?

He also explained: “An exit will not benefit anyone. Instead, it will trigger serious new problems–management of a new unstable currency, bank run phenomena, inflation, capital flight, and the migration of people. This is the reason Greece should not, and will not leave the Eurozone voluntarily. But there is also a second reason.

The exit of Greece or any other country in crisis would be a disaster for Europe. This is something that deep down, everyone knows.  If any country exits right now, both the markets and the speculators will begin to ask who’s next? They would say to each other, as you say here in Texas, “game on.” It is a process, that once it starts, it can’t be stopped. No matter how small the country exiting is. No matter whether it is voluntarily or not.”

Tsipras was very judgmental about the Troika and the plan chosen to deal with the crisis in Greece and other countries. He also referred to the decision of the European Parliament to establish a Committee of Enquiry about Troika.
“We are aware of the decision of the Finance Committee of Parliament to investigate the actions of the Troika in countries who suffer from the crisis.

We expect the establishment of a Committee of Enquiry or a Subcommittee with strong political mandate, with the ability to invite all members involved, including: former and current Prime Ministers of Finance in the crisis countries, central bankers, corporate advisory services and officials from the European Commission” noted the president of SYRIZA and added: “The President of the European Parliament said that someone has to take responsibility for what has happened in countries that have acted in accordance with Troika policies. We are positive toward this effort and we will contribute to this direction.”

It was also stated, that President of the European Parliament must also answer the following questions:

If someone takes responsibility, why should the implementation of the program continue?

European citizens, who are very close to the elections, will demand and should have straight answers to these questions.