Greek Women, Immigrants of Next Generation in Vienna 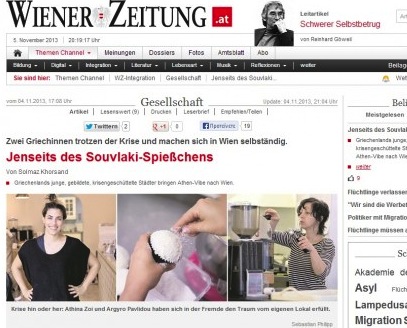 Wiener Zeitunng, the Austrian newspaper dedicated an article today, to the example of two Greek women who have immigrated recently to Vienna. The two Greek women have moved to Austria in order to find a way out from the Greek economic recession that has been nothing but a headache for young people. The newspaper’s article describes the life of “new gastarbeiter.”

This is how the media refer to immigrants of next generation. They are young middle-class people, well educated who have suffered in their homeland due to Europe’s economic recession  and they opt to live abroad, hoping they will find better luck there.

As Athina Zoi, one of the two Greek women of Wiener Zeitunng article says: “Greeks who have never considered coming here, are forced to leave Greece due to the situation.” Athina Zoi is owner of a small cafeteria in Vienna. The customers of her cafeteria are mainly Austrians and 20 percent Greeks.

Greeks, usually of young ages, visiting Athina’s cafeteria, are mainly discussing the presence of neo-Nazis in Greek parliament and how frustrating it is. They also try to explain to Austrians the causes of Greek economic crisis.

The other Greek woman of the article is Argiro Pavlidou. The Austrian newspaper divulges information about Argiro’s life until the time she moved permanently to Vienna. Argiro, as she belongs to generation of Greeks that seek a new start abroad, owns a Bistro in a central district of Vienna for two years now.

According to Mrs. Paulidou, Greek community in Vienna has undergone many changes in the past few years. Its members come mostly from big Greek city centers and less from the Greek countryside.