Ancient Theater of Sparta to be Restored 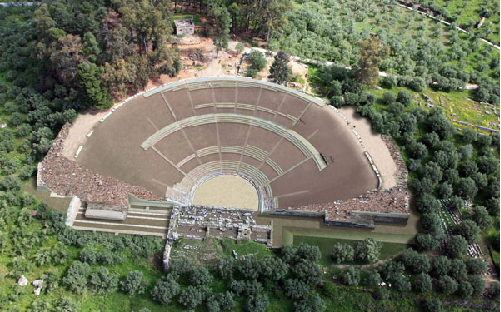 An important but neglected ancient theater is being restored and given to the public thanks to a partnership between private and governmental services..
With the help of the association DIAZOMA and a sponsorship by Niarchos Foundation, the study for the promotion of the ancient theater of Sparta was completed. The project has a budget of around 5 million and will be implemented by the Directorate of Restoration of Ancient Monuments, Ministry of Culture. Meanwhile the Peloponnese region offers €100,000 in order for excavations to be carried in the auditorium, where there is the possibility for new findings to come to light.
Ms Mendoni said, that the implementation of the first phase of the project is scheduled to begin in 2014 and will be complete in 2015. Long term, the renovation of the theater could continue, possibly by integrating archaeological material from future excavations. As part of a broader effort to project the heritage of Sparta, restoration work in ancient Acropolis is still in progress while, as noted by the district commissioner of Peloponnese, Petros Tatoulis, the excavations on the lot that will be erected in the new Archaeological Museum Sparta, are about to start.