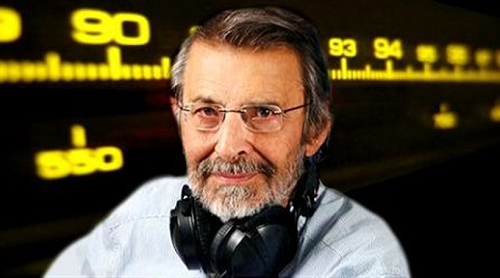 The playwright, lyricist and radio producer Giannis Kalamitsis, after many months of hospitalization at the Sismanoglio Hospital in Athens, Greece, passed away at the age of 74. The well-known radio producer lost the fight with renal insufficiency that for many months had affected his health.
Giannis Kalamitsis was born in Piraeus on the 31st of October in 1939, initially following his father’s footsteps as a cloth merchant. He began to study architecture in Canada, but soon abandoned the field and changed a number of jobs in Greece and other countries. He worked with many well-known artists and wrote comedies for the theatre, and lyrics for songs that attained great success. He even played amateur football, painted, made his own wine, and enjoyed woodworking.
Since 1990 he had his own morning radio emission (from 06:00 to 08:00) firstly at ANT1, then at NET (since 2006) and at REAL FM (since 2009).
Kalamitsis wrote the lyrics for more than 400 songs, some of which are considered treasures of the Greek repertoire while some of his lyrics have been set to music by famous Greek composers (Mikis Theodorakis, Giannis Spanos, Christos Nikolopoulos etc).