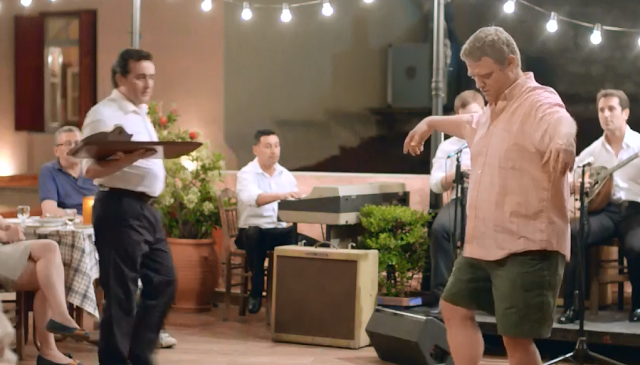 I really can’t remember how long it’s been since the last time a Greek commercial on television drew so much public attention. The series of commercials by Soho Square on behalf of Aegean Airlines, made the difference, garnering attention from beyond Greece.
Maybe it’s the fact that people during the crisis need to laugh more; maybe it’s the typical Greek concept that makes many of us identify with it, or maybe the truth about Greek “exaggeration,” which often characterizes Greeks is what draws us in… One thing is for sure- this smart script about passionate Greeks and their authentic hospitality, are the reasons why a large audience wants to see this commercial over and over again!
Greek Reporter met Kallina and Alex from the advertising team of “Soho Square,” who created the idea, as well as meeting Scott a sweet expat who plays the American “tourist,” who in the commercial is trying to learn the Greek  “zeibekiko” dance. In real life, Scott IS actually an American who used to travel to Greece frequently, before moving to Greece and living there with his Greek wife.
Creative Director Kallina Kiratsouli and copywriter Alex Esslin talk about the commercial that presents Greeks, with what is considered their “typical” characteristics, (in a good way of course) creating a concept that became famous through internet and Social Media and especially facebook in Greece and abroad.
The concept
It’s fair to say that the fun concept of the commercial, emerged through real-life Greek experiences, as many Greeks have lived similar incidents with tourists. The creators decided to take these authentic experiences,and turn it into an advertising concept that many can relate to.

The shooting
The shooting for the second commercial of Aegean, took place in an alley of Plaka, inside a tavern overlooking the Acropolis. This advertisement also pokes fun using the Greek expression used to greet someone- “Where are you my brother?” Among the actors were real tourists, that just so happened to be on set, while Eva Kakoulidi (the second copywriter), was trying to teach the “zeibekiko” dance to her colleague Alex as well the tourists!

Advertising in Greece during the crisis
This commercial, with the concept- “teach tourists how to act like a Greek,” became particularly known through the Internet and Social Media. Shares, likes and positive comments on facebook were many, while websites from Greece and abroad are talking about it. But what is a professionals’ opinion for advertising in Greece? What are their ideas about promoting Greece abroad and through video?
Kallina: Advertising has always been the future. Now more than ever as it has to do with internet too. The difference is that clients changed, and the way they advertise their company changed. During the crisis, people in Greece don’t have the money to buy the products or services someone advertises and as a result they stop advertising. For example, most people do not buy cars, so why to advertise a car? Or ads for loans and credit cards from banks no longer have a point. But in areas of high competition, such as mobile phone companies and those involved with food, are more interested to advertise.
The second successful commercial for Aegean Airlines

Viral Videos about Greece
Alex: Surely all the negative press on Greece, made us forget the positive side. So, in my opinion, it is good to promote such videos. If the video is nice- and usually a video about Greece’s beauty is difficult not to be attractive- then internet and Social Media will do their job! They will spread to the whole world.

Kallina: I very much like the self-sarcasm part in this work. All nationalities have their idiosyncrasies! So we Greeks know our own, and  out of all those intense features (which let’s face it, Greeks have plenty of), certainly the viewer will find some of them to identify with. Such campaigns, however, require a lot of work in order to convince someone. Otherwise viewers will underestimate it; the difference with the TV, is that the latter has the ability to approach the audience easily. 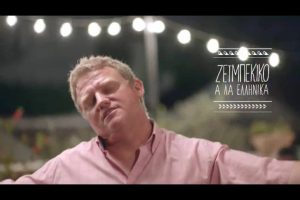 American “Zeibekiko” Casting
Scott was the only person they could picture casting for this role, as he was exactly what they wanted for the commercial! A cute American guy with light features, consistent with the stereotypes of a classic tourist and someone who dances, (or not) Greek zeibekiko! Scott is thrilled with his life in Greece, his participation in the Aegean Airlines’ commercial, and enjoys the result of good work with an extra facebook profile as Amerikanos Zeibekiko…
Scott: I have lived off and on in Greece since 1985. In 1985, I was initially assigned to our United States Air Force base at Hellenikon (near Glyfada). From the first day, I realized I had arrived somewhere special. Over the years I was assigned to Hellenikon, I had the opportunity to visit many of our US Military locations in Greece, and more importantly the local Greek communities attached to them, and it was then that my love of Greece started, from little villages in Northern Greece to small island hamlets in the Aegean, I was so impressed by the warm, and friendly people I encountered everywhere in Greece, and of course, the very attractive Greek women. I knew I was destined to meet and marry one… And as time passed, I did! So, when you asked what kept me in Greece, it was my wife and the great lifestyle we have in Greece.
GR: Why, do you believe, they chose you?
Scott: I think that I have the tourist look! Well, I cannot be sure, but I assume it was not because of my Zeibekiko dance. Maybe the opposite, so I could give a more humorous result. Of course, it could have been because of my good looks… (laughs)
GR: How did they find you for the commercial?
Scott: I had a friend who had done an Aegean Airlines commercial in the past, and he said I should register with a casting agency as they sometimes need models for commercials, and I said, “Have you seen me lately? I’m no model!” He told me that they also need foreign actors sometimes like me, so I registered with a casting agency and Aegean found me through there.

GR: Do you like zeibekiko and Greek dancing?
Scott: Well, after the commercial, I have a bit of experience I suppose. Yes, to some extent, as my Greek wife and daughter are fans of Greek dance, so I have some exposure to it. 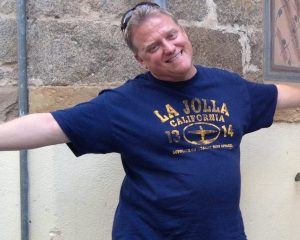 GR: The comments you’ve heard after the commercial?
Scott: I enjoyed my 5 minutes of fame! Overwhelmingly, the reaction to the commercial has been positive. There was only one negative response on social media that made me chuckle, as someone asked why they didn’t choose a “Greek” for my role, but I suppose there are not too many Greeks that look like me.
GR: What do you remember most from this experience?
Scott: From the moment I arrived on set, I knew I was part of something special! The director Babis Makridis and his crew, my partner in this duet George Andrisakis (the waiter) and Chara Delekou from Aegean Airlines treated me as if I was part of their extended Aegean/ Soho Square family.
The funny part is that although I was dressed in typical Greek style clothing prior to leaving my home, on the set I was transformed into the quintessential tourist with white socks and jogging shoes! My treatment and experience from this commercial is just a small microcosm, typical of the wonderful Greek hospitality that tourists and visitors receive in Greece.
GR: Where are you from?
Scott: Southern California!
GR: What do your American friends say about Greeks, the crisis and Greece in general?
Scott: Most of my American friends are very curious to know more about Greece and tell me how lucky I am to live there. Of course, some do ask if it’s safe to live here with the riots etc. I tell them that sometimes the media (world- wide) tends to exaggerate the threat, and the reality is that Athens is just as safe (if not safer) than any major city in the USA.
GR: What you like and hate most in Greek lifestyle?
Scott: I would say that the thing I like the most about Greek lifestyle, is being able to get any kind of Greek food I want at most times of the day and night, and have a beer by the seaside with some nice music playing nearby. I don’t really hate anything about Greece, but I will say that I do not like that smoking is allowed everywhere, but of course, I do respect democracy and that smoking is so popular in Greece that I am in the minority. I like life in Greece, but I will say that if I could convince my wife to move to Crete, Skopelos, Patmos, Tinos, or Ikaria (my favorite Greek islands), then I would like it even more!

GR: Would you like to go back to America?
Scott: I do occasionally visit my family in the USA, and no one really knows what the future holds, but certainly I know that both the USA and my adopted country of Greece play a big role in my future.
GR: What are the plans for now?
Scott: I believe in living one day at a time. If I can quote the famous “Alexis Zorba” who once said, “You think too much. That is your trouble. Clever people and grocers, they weigh everything”. My dream is to one day live on a Greek island and not weigh anything!

Trachanas is a staple Greek recipe ready in minutes, filling, and full of vitamins. However, the process of making it actually takes months.
Culture