Victims of the Terrorist Killings in Greece 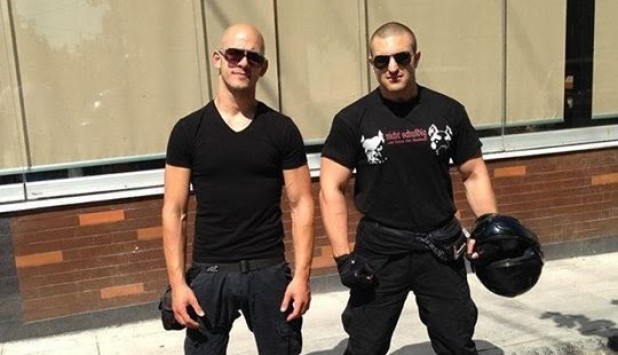 The 27-year-old Giorgos Fountoulis and the 22-year-old Manolis Kapelonis are the two Golden Dawn members who were murdered in cold blood during the alleged terrorist attack that took place on the evening of Friday November 1st in Neo Irakleio, a suburb in the northern part of Athens, Greece.
According to the Greek media, Fountoulis was working at a café in the region of Neo Irakleio while Kapelonis was working in his father’s business.
The attack included a third victim, 29-year-old Alexandros Gerontas. Gerontas, son of a local counselor at the Municipality of Kifisia and father of a young child, is severely injured in the chest and abdomen. The 29-year-old is hospitalized in critical condition at the ICU of “Georgios Gennimatas” Hospital, while the doctors are fighting to keep him alive.
Gerontas underwent four hours of surgery and the doctors said it went well. However, he is still in danger. According the second medical bulletin that was released the early hours of Saturday 2nd of November, the injured was subjected to splenectomy and the lesions were restored, as it was found that the young man had a spleen lesion, stomach injury, diaphragm rupture and three traumatic lung ruptures and pulmonary hemorrhage.
As it was also reported by the hospital, Gerontas during his transfer to the hospital, bore a side to side trauma in the left loins and the left subclavian artery area which were the points of entrance and exit of the bullet.
The daughter of Golden Dawn leader Nikolaos Michaloliakos, Ourania Michaloliakou and the Golden Dawn MP Ilias Panagiotaros along with around sixty members of Golden Dawn visited Gerontas at the hospital.

Temperatures in the Eastern Mediterranean are rising three times faster than the global average, with the effects of climate change already felt in Greece.
Charity

The Penelopean Daycare in Athens has taken care of some of the most disadvantaged children in the Greek capital for decades.
Culture