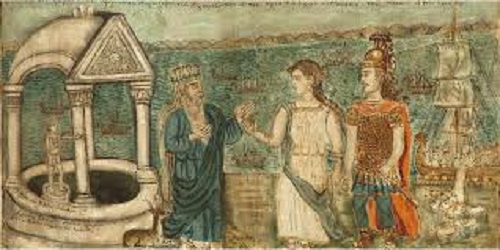 Bonhams sale of Greek art features several works which refer to the heroism of a mythical past, and reflect the artists’ view of painting as the only way to explain what it means to be Greek in the modern world. The exposition will take place on November 26 at 101 New Bond Street London.

Bonhams sale hosts a great number of important Greek painters. For example, the work of the naïf painter Theofilos Hadjimichail entitled Ulysses took an important place in the room. In the painting Iphigenia, the daughter of Agamemnon was brought to the High Priest Kalhas for her to be sacrificed to the God Apollo. This story is a key episode in the Iliad when the Greek commander offered his daughter as a sacrifice in order to assuage the wrath of the goddess Artemis who was preventing the Greek fleet from setting sail for Troy. The last time Artemis saved Iphigenia and left a deer on her place. The price of the painting is estimated at £120,000-180,000. For Theofilos the most important part of the myth is the willingness of Iphigenia to sacrifice herself in order to save Greece. Theofilos is one of the most important Greek painters. According to Seferis and Elytis, the two Greek Nobel prize-winning poets, Theofilos gave expression to the face of Greece.

Yannis Tsarouchis is one of the famous artists of 30s generation. He had totally changed the history of painting, because he reinterpreted the tradition of the nation’s artistic past in a modern way. His starting point in order to identify the Greek identity is the Cretan poetic romance Erotokritos. Its themes are love, honour, courage and friendship. According to the famous critic Kapetanakis “What’s remarkable is that Tsarouchis managed, with the wisdom of his art, to elevate a model posing in his studio into a symbol of the Modern Greek spirit.” The price of Erotokritos is estimated at £10,000-15,000.

The sale also futures the work of more Greek artists of the 1930s generation such as the Mida’s Street by Nikos Engonopoulos which shows the legends surrounding the pleasure- seeking but impetuous King Midas who not only acquired asses ears for criticizing Apollo’s performance on the lyre but, in wishing that whatever he touched would turn to gold, condemned himself to starvation until released by the god Dionysus.

Olympia Pappa, the Specialist in Greek Art at Bonhams stated that: “All the major Greek artists are represented with high quality works which not only go to the heart of what it means to be Greek, but also delve deep into the past to illuminate the present.”