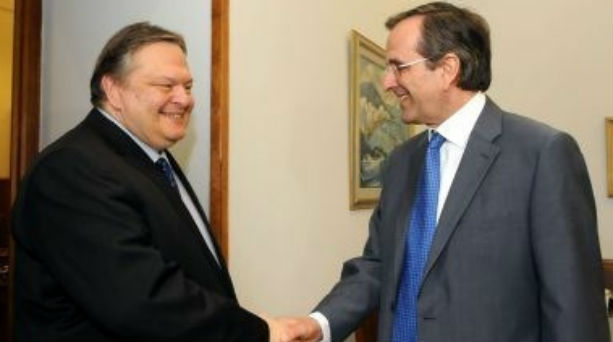 Greek Prime Minister Antonis Samaras and his coalition partner Evangelos Venizelos agreed on Wednesday that the government should make changes to its property tax bill in a bid to overcome opposition from their MPs but faced the prospect of the return of the troika, planned for next week, being put off indefinitely.
Samaras and Venizelos met on Wednesday afternoon to discuss complaints about the property tax legislation but also to prepare for the return of Greece’s lenders to check on the progress of the outstanding reforms that have to be completed for Athens to receive its next bailout tranche of 1 billion euros. However, it emerged that troika inspectors will not be back on Athens on November 4, as had previously been planned.
There is no set date yet for the troika return.
Persistent disagreements between the Greek authorities and the country’s creditors over the fiscal gap in the 2014 budget, as well as continuing delays in the implementation of the prior actions for the disbursement of the October sub-tranche, which was approved “in principle” in July, mean that the review mission will remain on hold for the time being.
With regard to the property tax, Venizelos and Samaras agreed that changes should be made without affecting the goal of collecting 2.9 billion euros in revenues next year. The bill caused a stir among coalition deputies because it increases taxation on farmers and imposes levies on a variety of buildings, including sheep pens, greenhouses and barns. “We will continue to make improvements, not just because of pressure from MPs but because we are fully aware of the difficulties society faces,” said Venizelos following his meeting with the prime minister.
Finance Minister Yannis Stournaras met on Wednesday afternoon with 24 New Democracy MPs to discuss the proposed property tax after the lawmakers made their objections known in writing.
(source: ANSA)