TechNews
GreekReporter.com Greece The History of American Interceptions in Greece

The History of American Interceptions in Greece 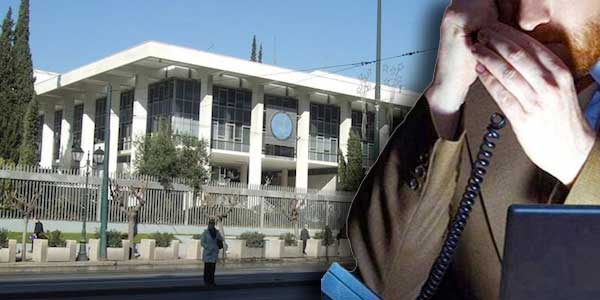 The case of American interceptions isn’t anything new because former agent of the U.S. security agency, Snowden revealed it.
At least in Greece it is suspected that these interceptions began immediately after the Olympic Games in 2004.
It was on  February 2, when an intense and unusual press conference took place: The Ministers of State, Public Order and Justice (Roussopoulos, Voulgarakis and Papaligouras) revealed a variety of interceptions that were taking place in the geographical “triangle” around the U.S. Embassy in Athens, through the private mobile phone company Vodafone. During 2004-2005, about 100 phones were being monitored, with special software installed in the company, using 14-16 prepaid mobiles to record conversations.
Many important political figures were being monitored, including the then Prime Minister, Costas Karamanlis, and activists and members of trade unions.
Further investigation showed that the U.S Embassy was responsible for these interceptions. However, the Greek government couldn’t accuse the U.S Embassy but only imply its involvement.
This case of interceptions was connected with the death of a Vodafone employee Costas Tsalikidis. He was  found dead on March 9, 2005, one day before authorities had been informed on the existence of the suspicious software. Initially his death was attributed to suicide but new data in 2010 showed that it could have been a murder.
It was clear that the investigation incriminated the U.S. Embassy. However the Greek Government didn’t have indisputable evidence to press charges.  Meanwhile the embassy officials who could be prosecuted, and all the diplomats involved with the case left Greece.  The U.S.  never intended to cooperate, or admit that they had some connection with the interceptions.