GRNews
GreekReporter.comGreeceWhy Little Maria is Blonde While Her Roma Parents Are Not

Why Little Maria is Blonde While Her Roma Parents Are Not 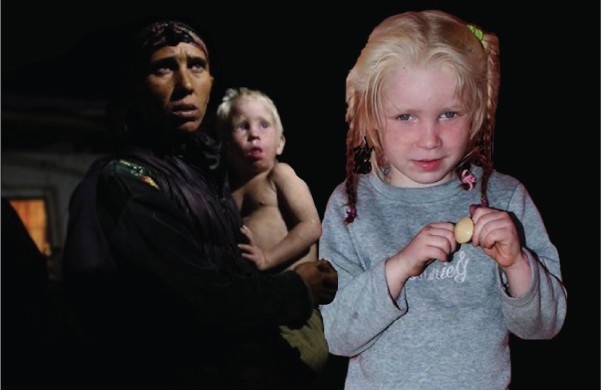 Little blonde mystery girl Maria is not an “abducted western baby” found in Greece but a Roma girl from Bulgaria that is possibly an albino.
DNA tests proved that her biological parents are Roma from Bulgaria, Sasha Ruseva and Atana Rusev. They claimed that they left her in Greece with another Roma couple because they did not have money to raise her.
But how did this Roma couple with dark features come to have children with blond hair, fair skin and blue eyes? The key to the mystery might be an “albino gene” Atanas Rusev carries, according to the Daily Mail. In this case the biological children are affected by it and thus they have blonde hair and light features.
What is Albinism?
Albinism is an inherited condition present at birth, which results from the inheritance of recessive genes, alleles. An allele is one of a number of alternative forms of the same gene or same group of genes.
Albinism -also called achromia, achromasia, or achromatosis- is characterized by a reduced or lack of pigment that normally gives color to the skin, hair, and eyes due to absence or defect of tyrosinase, a copper-containing enzyme involved in the production of melanin.
Relatives of little Maria have said that she was taken to a hospital because she was having problems with her eyes. According to the American Association for Pediatric Ophthalmology and Strabismus albinism also affects the human eye.

Albinos may suffer from Preferred head turn or tilt, Strabismus, Photophobia, hyperopia, myopia, astigmatism,optic nerve misrouting and iris transillumination. Vision can range from normal for those minimally affected, to legal blindness (vision less that 20/200) or worse for those with more severe forms of albinism. Near vision is often better than distance vision. Generally, those who have the least amount of pigment have the poorest vision.

However according to the same organization only one person in 17,000 has some type of albinism.

Most children with albinism are born to parents who have normal hair and eye color for their ethnic backgrounds. Some patients with albinism have white hair and very light blue eyes, while others have blonde hair and blue eyes and might not even know they have albinism as their signs are so subtle.

AAPOS notes that for most types of albinism, both parents must carry an albinism gene to have a child with albinism. Parents may have normal pigmentation but still carry the gene.
When both parents carry the gene (we do not yet know if Maria’s mother also carries an albinism gene) and neither parent has albinism, there is a one-in-four chance in each pregnancy that the baby will be born with albinism.
The Roma family from Bulgaria that DNA tests showed is Maria’s biological family, already have two children, that according to their parents are albinos. If Maria is in fact an albino it will be their third child with albinism.