GRNews
GreekReporter.comGreeceGreek Movie Fridays: “Loafing and Camouflage: Sirens in the Aegean”– Watch it...

Greek Movie Fridays: “Loafing and Camouflage: Sirens in the Aegean”– Watch it on PameOdeon.gr! 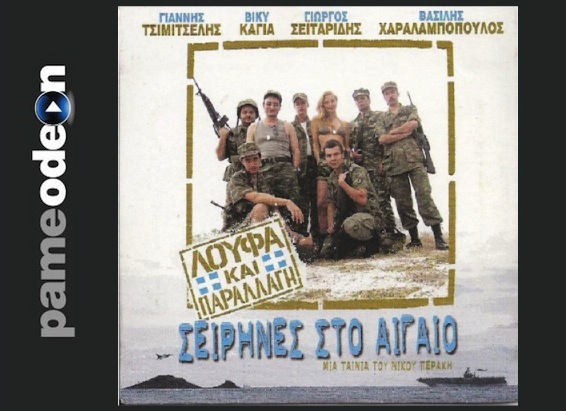 The second film for our Greek movie Fridays, is the Greek comedy of Nikos Perakis Loafing and Camouflage: Sirens in Aegean. A film that brings us back to funny moments from the army times in a unique and compelling way!

The Greek leading film distributor and producer, Odeon S.A., and Greek Reporter have teamed up to promote Greek cinema to a new worldwide audience, through the new video on demand platform, PameOdeon.gr.

Who said that military experiences and stories from the army are boring? Nikos Perakis, who wrote the script and directed the movie, proves exactly the opposite!
The story begins on August 14, summer 2003… Soldier Alexandros Tzibitzidis is serving on Kos Island, and waiting for his girlfriend to arrive so they can spend a romantic three days together. Alexandros is excited to see his girlfriend, but unfortunately the other soldiers aren’t very pleased…
Alexandros’ army pals decide to organize an elaborate prank on him. They put on a false alert, and tell him that Turkish provocations are expected. Suddenly, poor Alexandros is sent to an isolated rocky island called Pitta…..
Things don’t go according to plan for those who had the idea for the prank! The day after Alexandros’ arrival, a Turkish yacht, “Ege Guzeli,” attempts to disembark three illegal immigrants, two weary men and a six-year-old girl on Pitta island. During the “boarding” the suspicious sergeant Parlavatzas notes that in the yacht, apart from the captain and the sailor, are two candidates and one former beauty queen, a reporter and a cameraman from Bodrum TV, a local channel and sponsor of the “Pageant Bodrum.” Things get complicated and the joke turns serious…
However, the “evil” call center operator, soldier Bakakos, who initiated the prank, believes that what is happening on the rocky island of Pitta is part of the joke, and continues to mislead his colleagues with wrong information and facts, making the situation even more difficult.
The interesting characters of the movie are made up of: a happy optimistic gay man, a call center operator who only thinks about women and sex, and a nervous but brave young man from the island of Crete, making this a must-see Greek comedy!!!
Director: Nikos Perakis
Script: Nikos Perakis
Actors: Giannis Tsimitselis, George Seitaridis, Ioannis Papazisis, Sokratis Patsikas, Stelios Ksanthoudakis, Orfeas Avgoustidis, Vasilis Charalampopoulos, Renos Charalampidis, Vicky Kagia
Production: Greece
Follow the steps below to watch the film:
PameOdeon.gr makes it easy to watch your favorite films with 5 easy steps:
• Visit PameOdeon.gr
• Register a new account or login into your existing one.
• Browse hundreds of Greek films.
• Purchase a discounted program or choose pay per view.
• Choose your favorite film to watch.
• Enjoy!