Greek and FYROM Ambassadors Meet with Nimetz in NY 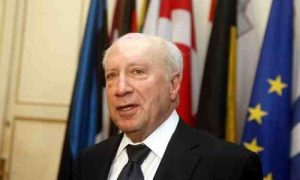 Yesterday, Thursday October 24, Matthew Nimetz, the American diplomat tasked by the UN to mediate the resolution of the naming dispute between Greece and FYROM, met with ambassadors Adamantios Vasilakis and Zoran Jolevski in New York, as the Greek newspaper To Vima reports. A meeting of Mr. Nimetz with the two ambassadors is scheduled for today, Friday October 25, at the UN headquarters.

According to the article published by To Vima, Martin Nezirski, the representative of the UN’s General Secretary, explained that finding a solution to the naming dispute is in the interest of both countries and the greater region in the West Balkans.

Mr. Nezirski expressed his hopes that the current round of talks will lead to serious negotiations and a mutually accepted solution to the naming dispute.