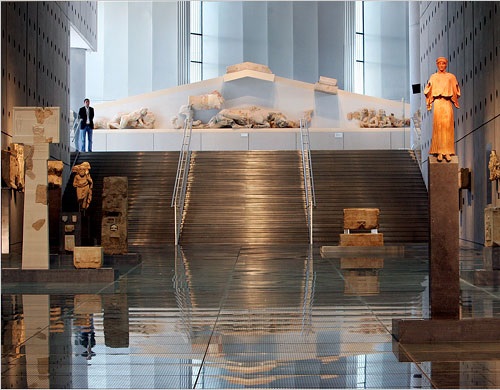 In celebration of “Oxi Day,” on October 28, Acropolis Museum will offer its visitors free admission and special events.
October 28 is an important national holiday in Greece as it commemorates the day Prime Minister Ioannis Metaxas rejected the ultimatum given by  Benito Mussolini, the Italian Dictator in1940. This was the day Greece entered the second World War.
On October 28 Acropolis Museum will be open from 8 a.m. to 8 p.m. and the admission will be free of charge.  The Museum will present a talk for adults, titled “The Other Gods of the Acropolis” and an interactive workshop for children, titled “Myths in Images.”
“The Other Gods of the Acropolis” will give viewers the chance to meet the gods and heroes who were worshiped on the Acropolis and the places of cult of Poseidon, Artemis, Zeus, Asclepius, Dionysus, Aphrodite and other gods as well. The presentation will be held in English at 1 p.m. and French at 5 p.m.
“Myths in Pictures” is the title of eight workshops for children aged 8-12 years. Children will be able to create their own artistic impressions of ancient Greek myths. How did ancient Greeks manage to fit their myths in images? How did they give life and emotions to immobile protagonists? Children are invited to set up mobile laboratories in front of ancient heroes and monsters and draw famous ancient myths.