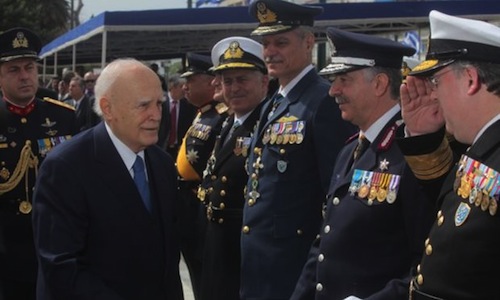 Greek President Karolos Papoulias is going to attend the celebrations on the 28th of October in Thessaloniki. The liberation of the city, as well as the city’s patron St. Dimitrios are also celebrated on the same day.
On Saturday President Papoulias with Vice President Evangelos Venizelos will meet Ecumenical Patriarch Bartholomew at the St. Dimitrios church.
The city’s 101st anniversary of liberation event will be held at the Aristotle University of Thessaloniki where university’s Rector Yannis Mylopoulos will open the ceremony.
On Sunday morning, Mr. Papoulias is going to inaugurate the exhibition entitled “This is how we fought in 1940” which has been organized by the Ministry of Macedonia and Thrace. The exhibition features pictures and artifacts from the battles in Albania, Macedonia, Thrace and Crete. The parade of students will start at the same time.
The military parade on Monday, which will see the return of armed vehicles, will begin at 11am. The Minister of National Defense Dimitris Avramopoulos will represent the government. Security measures are expected to be especially high and about 3,000 police officers are expected to be deployed.