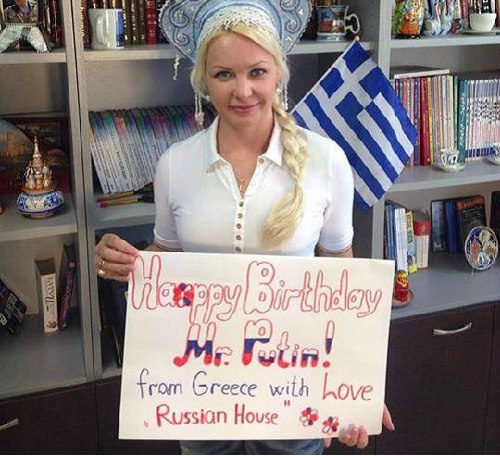 An original gesture in social media (Facebook), is landing Julia Gavrilova a face to face meeting with President of the Russian Federation Vladimir Putin. This is to be arranged by the President of the Cultural Association “Russian House”, based in Alexandroupoli, within the next year.
More specifically, Ms. Gavrilova participated in the international competition with  greetings to President Putin’s personal facebook account for his birthday on Oct. 7. As a result, the card from the “Russian House”  received the most votes of acceptance (6,179 likes), placing Greece first in the world. A few days later, Ms. Gavrilova was informed with a personal email, from the President of the Russian Republic and also from Facebook, that her reward for this gesture would be a personal meeting with President Putin in 2014.
According to Ms. Gavrilova the significant number of the card’s positive votes of acceptance worldwide, is largely due to the fact that the greetings were from Greece.
As she said to ANA -MPA, the fact that the card came from Alexandroupoli also must have played an important role, because lately there is a great approach in the area with the region of Saint Petersburg and in particular the city Sosnovy Bor,w ith which Alexandroupoli was fraternized in 2010. During the celebrations of October 28th, when the events of “Russian Days” will take place in Alexandroupolis, an official delegation from the region of St. Petersburg is arriving with the Mayor of Sosnovy Bor himself.
Another important fact according to Ms. Gavrilova was that last summer, Alexandoupoli was connected with direct air flights to St. Petersburg and Moscow, sharply boosting tourist arrivals.
“This victory of the cultural association ‘Russian House’ is especially symbolic in order to boost tourism between the two regions because it is now about something personal, President Putin’s birthday, through an international competition where Greece came first. In a short while, we expect to complete the process for the formal operation of the Honorary Russian Consulate Eastern Macedonia -Thrace in Alexandroupolis” stated Ms Gavrilova.

Record Number of Coronavirus Patients on Ventilators in Greece Monday