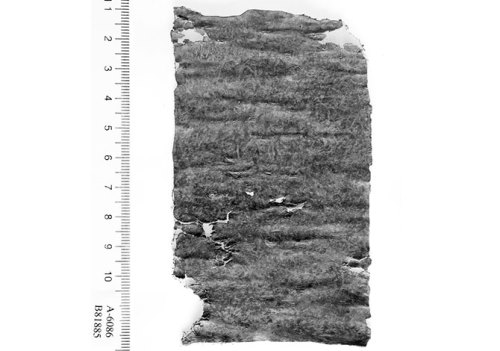 Archaeologists found a 1,700-year-old curse tablet from a Roman mansion in the City of David in Jerusalem. A magician named Kyrilla had written in the tablet curses in Greek, for a man named Lennys.

The mansion, which is being excavated by the Israel Antiquities Authority, is located on what is known as the “City of David,” an area that holds at least 6,000 years of human occupation. The mansion itself covers at least 2,000 square meters and contains two large open courtyards. It was in use between the late third century and 363 A.D., when it was destroyed in a series of earthquakes on May 18 or 19.

Magician Kyrilla through this curse, invokes the names of Gods Hermes, Persephone, Hecate, Pluto and divinities of the East as Eresigkal and Armpachal to curse Lenny over a legal case.

A translated part of curse says “I strike and strike down and nail down the tongue, the eyes, the wrath, the ire, the anger, the procrastination, the opposition of Lennys.” Kyrilla asks the gods to ensure that “he in no way opposes, so that he says or performs nothing adverse to Kyrilla…but rather that Lennys, whom the womb bore, be subject to her…”
Kyrilla in aim to reach her goal combined elements from four religions. Moreover, the text contains magic words such as “Iaoth” that have a Hebrew/Judaism origin.

She was probably member of the Roman middle or upper class likely in some legal dispute, as the curse tablet bears similarities to others found in Cyprus that are known to have been used in legal cases. Additionally the word “opposition” in this text hints at a legal matter.