Samaras and Venizelos Say "No" to Horizontal Measures 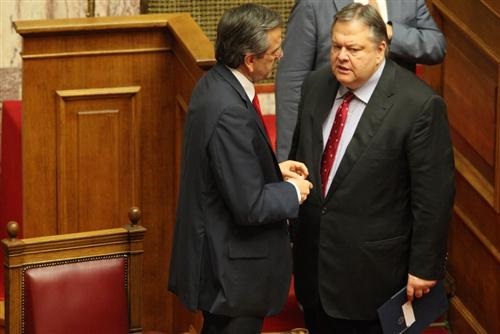 During their meeting, the Greek Prime Minister, Samaras and the vice-president of the government, Venizelos, resulted in a programmatic agreement.
The text, among others, states that the stability of the government and the completion of four years in office are the main goals. “Samaras and Venizelos are fully aware of the situation prevailing in the society, so the first objective is the containment of unemployment.”
Venizelos reported that “the programmatic agreement is the framework of  negotiations towards Troika and creditors. We are consistent. We will meet  our obligations but we can not accept new burdens for the Greek people. The programmatic agreement  does not concern the two parties, but government and the Greek people. It is an invitation to all the political forces to collaborate.”
The text of the agreement also refers to the strengthening of employment which will be realized through development measures and structural changes. “There is no Plan B without sacrifices. There is no easy way to get the country out of recession.”
Both Samaras and Venizelos agreed that there won’t be any further horizontal measures. They say that neither society nor national economy can bear new fiscal measures that cut wages and pensions.